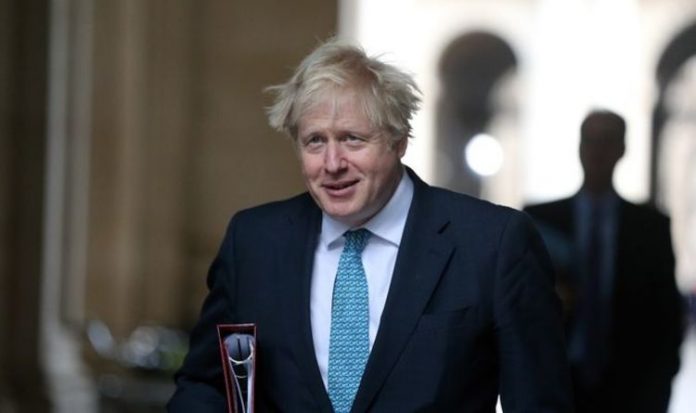 The Prime Minister is determined to stick to a five-day festive window allowing indoor gatherings for people from three separate households – despite demands for a rethink. He aims to issue a fresh plea to families to keep seasonal meetings to a minimum and set out clear guidance on how to enjoy family celebrations safely.

And two leading medical journals branded the Christmas break a “rash decision” that could “cost many lives”.

But a Government source said: “I don’t think the rules are going to change. The three-household bubble rule over five days are very much likely to remain in place.

“It may be that we clear up the advice to people to give them more information about how to have a safe Christmas.”

Mr Johnson is understood to be set against asking families to rip up already-made plans for Christmas with just days to go.

Whitehall insiders fear scrapping the rules will lead to widespread flouting of the tier system. It comes as daily figures showed a further 506 people had died from Covid-19, bringing the UK total to 64,908.

Alarm about spiralling numbers of infections and the emergence of a new, even more virulent Covid strain has escalated since the Christmas plan was announced earlier this month.

Public opinion appeared to be hardening yesterday against the temporary easing of rules.

A YouGov poll found 57 percent of Britons want the current tier restrictions, banning indoor gatherings across most of England, to remain in force at Christmas.

And an Express Online poll found 60 percent of respondents wanted the Prime Minister to cancel his Christmas plan “and stop a third wave” of coronavirus.

After yesterday’s call a spokeswoman for First Minister of Northern Ireland, Arlene Foster, and her deputy Michelle O’Neill said: “Ministers will discuss the current situation with medical and scientific advisers. It is expected that an update will be brought to the Executive on Thursday.”

Before the call, Ms Sturgeon said: “I do think there is a case for us looking at whether we tighten the flexibilities, both in terms of duration and numbers of people meeting.”

Welsh First Minister Mark Drakeford said the current plans were a “hard-won agreement” that should “not lightly be put aside”. Meanwhile in Downing Street, Mr Johnson told the weekly Cabinet meeting that coronavirus infections were surging in areas such as the South-east of England.

He said: “We are now seeing significant rises.”

After the meeting, Mr Johnson’s spokesman said: “Our intention to allow families and friends to meet up over the Christmas period remains.”

Ministers are today due to review regional rules in several more areas following the decision earlier this week to put London and parts of Hertfordshire and Essex under the toughest Tier 3 restrictions.

London has been put under the toughest Tier 3 restrictions (Image: WIktor Szymanowicz/NurPhoto/PA)

Data from Public Health England shows Covid-19 cases rising in more than three-quarters of all local areas in England.

A total of 246 out of 315 local authority areas – 78 per cent – recorded a weekly increase in rates in the seven days to December 11. They included every London borough.

In North-west England, where rates had been falling, the latest figures show they are up in 25 out of 39 areas.

A joint editorial published by the Health Service Journal and British Medical Journal yesterday urged the Government to scrap the plan.

It said: “Members of the public should mitigate the impact of the third wave by being as careful as possible over the next few months. But many will see the lifting of restrictions over Christmas as permission to drop their guard. The Government was too slow to introduce restrictions in the spring and again in the autumn.

“It should now reverse its rash decision to allow household mixing, and instead extend the tiers over Christmas to bring numbers down in the advance of a likely third wave.

“It should also strengthen the tier structure, which has failed to suppress rates of infection.”

Mr Starmer called for a meeting of the Government’s “Cobra” emergency planning committee to review the Christmas plan.

In a letter to Mr Johnson he wrote: “People want to spend time with their families after this awful year, but the situation has clearly taken a turn for the worse since the decision about Christmas was taken.”

Former health secretary Jeremy Hunt said: “Curiously the economic impact could be worse from taking our foot off the pedal for Christmas if it meant we had to go into another national lockdown.”