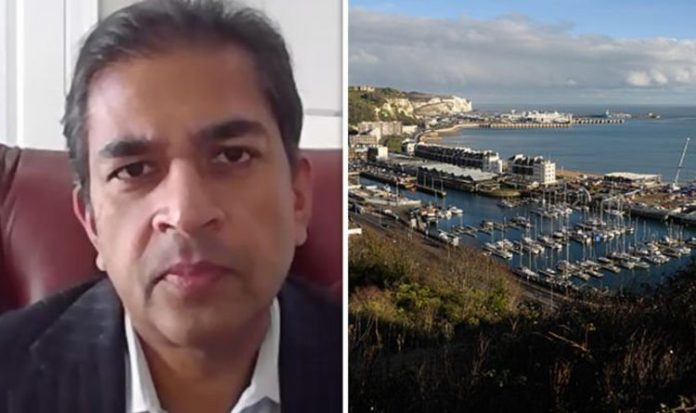 Emmanuel Macron’s potential rival at the 2022 French presidential election, Xavier Bertrand, has once again asked the President to offer Calais special tax privileges in a bid to entice customers from mainland Britain after the Brexit transition period. Mr Bertrand is a high-profile former member of Les Républicains and with strong links to the fishing industry. He is the President of the Hauts-de-France region and served as health minister under Jacques Chirac and labour minister under Nicolas Sarkozy.

Mr Bertrand wants to be able to slash the price of cigarettes, alcohol and perfume in anticipation of the return of the “booze cruise” culture.

In September, Minister of Ecological Transition Barbara Pompili dismissed the prospect of a duty-free zone.

However, in a letter, the President of the Hauts-de-France region has reminded Mr Macron of commitments he made in 2018.

The French President had accepted the principle during a trip to Calais in January 2018.

Mr Bertrand wrote that Ms Pompili’s declaration was “in total contradiction” with his remarks.

For Mr Bertrand, this initiative “would have been a response to the possible unfair competition of the ten free ports envisaged by the British government by the end of 2021”.

In an interview with Express.co.uk, Government trade adviser Shanker Singham welcomed the idea, urging Prime Minister Boris Johnson to do the same in Dover.

He said: “What would be a great suggestion is a twinned free trade zone Dover-Calais.

“That would be such a great opportunity, with the Channel Tunnel as a link between them.”

JUST IN: English language dubbed ‘on way out’ by Brussels

In August, International Trade Secretary Liz Truss unveiled a new Freeports Advisory Panel to advise the Government on the establishment of up to ten free ports.

Ports and airports across the country will be able to bid for free port status and it is expected they will have a similar effect to the boost given to London’s Docklands in the Eighties.

The Government said this will reduce costs and bureaucracy, encouraging manufacturing businesses to set up or re-shore.

Writing exclusively for the Daily Express in August, Ms Truss said: “Free ports transformed London’s Docklands in the Eighties, and free ports will do the same for towns and cities across the UK.

“They will ensure enterprise and manufacturing as the gateway to our future prosperity, creating thousands of jobs.”

The Institute of Economic Affairs’ Head of Regulatory Affairs Victoria Hewson voiced support for the plan after Ms Truss’ announcement, and said: “Done right, free ports can be transformative.

“This announcement sends a strong message that the UK is serious about embracing the freedoms that come with leaving the EU customs union and single market.

“We should ensure that this programme frees businesses from the burdens of bureaucracy and high taxation in a truly creative way; and encourages real investment rather than diversion of business from other parts of the country.”