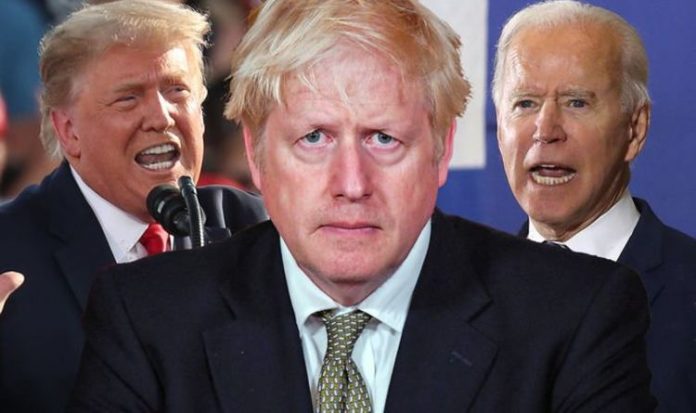 Prime Minister Boris Johnson triggered a serious backlash after announcing the Internal Market Bill. The bill, which has passed through the first few obstacles and is now in the House of Lords. If it passes into law, the proposed legislation would enable “unfettered” trade between the four nations of the UK after Brexit.

However, the Northern Ireland Secretary Brandon Lewis confirmed it does “break international law, in a specific and limited way”.

The bill would give ministers the powers to make regulations about goods going from Northern Ireland to Britain.

This undermines the withdrawal agreement — signed by both the UK and the EU — which includes the Northern Ireland Protocol.

The protocol aimed to prevent a hard border between the Republic of Ireland and Northern Ireland arising and respect the Good Friday Agreement by effectively putting a customs barrier down the Irish Sea instead.

Northern Ireland would then continue to follow the same trade rules as the Republic, those of the EU’s single and customs market, while still officially leaving the EU with Britain.

While Mr Johnson has stood by his divisive new bill, some speculate that it has marred Britain’s international reputation and post-Brexit future.

When asked about how this could impact UK-US relations, economics professor Kevin O’Rourke told Express.co.uk: “There’s not much point in anyone doing deals with a country that doesn’t feel itself bound by them.”

The possibility of a future trade deal with the US could also be jeopardised if Democrat nominee Joe Biden wins the US presidential election in November.

President Donald Trump, on the other hand, has been supportive of the UK’s decision to leave the EU and said Britain could have a “more lucrative” deal with the US that ever could have had with its European neighbours.

His Secretary of State Mike Pompeo said he had “great confidence” that Westminster “will get this right in a way that treats everyone fairly,” when commenting on the controversial bill.

Even so, the bill has left many EU figureheads reeling, with Taoiseach Micheal Martin claiming it “eroded trust” between the UK and the bloc.

Economist Mr O’Rourke also claimed: “I would expect that all parties in Ireland would be united in horror at any attempt by the UK government to resile from an internationally binding treaty.”

Yet, writing for the think tank Institute for Government, Brexit research associate Raphael Hogarth pointed out the bill could just be a precautionary measure at this point.

He explained: “Unless the powers were actually used, the UK would not be in breach of the state aid and customs provisions of the Northern Ireland protocol.”