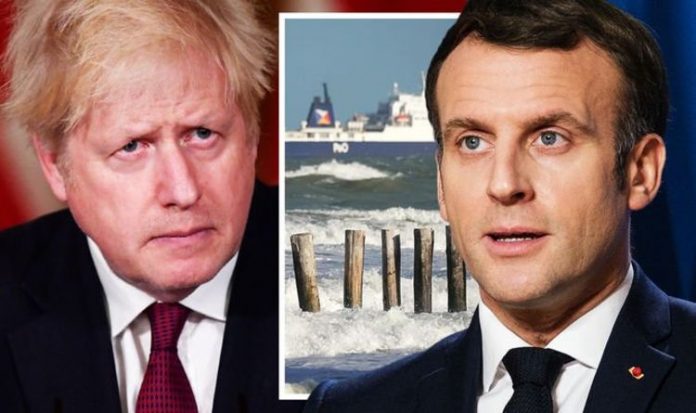 The coronavirus pandemic has sparked a crisis as a new strain of the virus provokes France to ban UK freight from entering the country. The decision by French President Emmanuel Macron will be implemented for 48 hours, and has led to gridlock by the English Channel tunnel as lorries pile up in Dover and Kent. Prime Minister Boris Johnson spoke to Mr Macron today. He said: “It was an excellent conversation with the French President. He said he was keen to sort it out in the next few hours. “Our teams will be working on it flat out and if we can get a result then that will be great but we’ll do it as fast as we can.”

This isn’t the first time Mr Macron and Mr Johnson have clashed over movement between the UK and France via the Channel.

In 2018, when Mr Johnson was Foreign Secretary, he suggested that the UK could build a 22-mile bridge across the Channel to enhance transport links with France after Brexit.

The former London Mayor said it was “ridiculous” that France and the UK are only linked by a single railway line.

However, Mr Johnson’s plan was met with criticism.

The UK Chamber of Shipping Chief Executive, Guy Platten, said: “It’s good to have vision, particularly with respect to transport infrastructure projects, but the Dover Strait is the world’s busiest shipping lane.

“Many, many hundreds of vessel transits are made each day by commercial shipping, fishing and pleasure craft.

“Building a 22-mile-long bridge across the Channel would be a huge construction project, especially as the largest ships currently transiting the strait have a height above the water line in excess of 70 metres.

“Shipping moves 95 percent of the UK’s trade – it is vital that its movement remains as frictionless as possible, without disruption of any kind.

“The Government and the EU should concentrate on keeping trade moving freely through our ports, which is in the economic interest of both sides of the Channel.”

Nigel Farage also hit out at the plans, tweeting: “Boris’ bonkers bridge sounds like a big waste of money. Dangerous for container ships and useless when the wind blows (which is often)!”

The EU has tried to preserve its access to UK waters, as fishermen from members of the bloc including France, Belgium and Denmark rely on these fishing grounds to keep their businesses afloat.

The French President has pressured Brussels, demanding negotiator Michel Barnier stands firm by his demands despite the risk of a no deal Brexit.

Mr Johnson wants UK fishermen to be prioritised in British waters after the transition period is up.