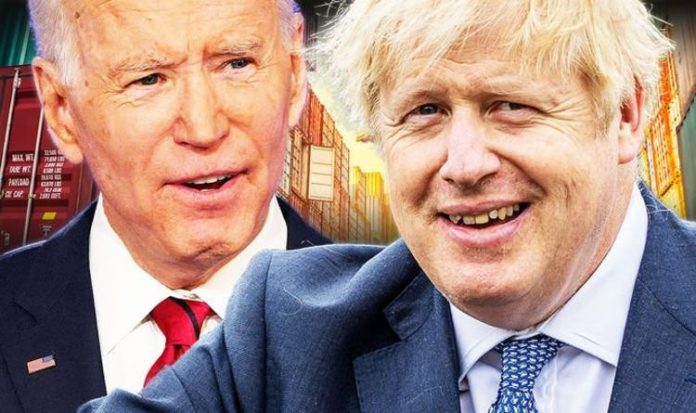 International Trade Secretary Liz Truss met her US counterpart in Washington for the third round of talks to reach a trade deal between the two countries earlier this month. Mr Johnson put an agreement with the US at the heart of his plans to revive the British after Brexit, and Ms Truss’s decision to travel during the coronavirus pandemic highlighted London’s willingness. However, despite Ms Truss’ visit, the talks have been beset by disagreements and the Secretary of State, Robert Lighthizer, said a deal is “unlikely” to happen this year.

The upcoming US presidential election, due to take place on November 3, could also further complicate things for Britain.

Joe Biden, Mr Trump’s Democratic rival and currently ahead of the polls, is said to be against the landmark free-trade deal between the two nations.

His position on the matter is not exactly known, but Democratic Party leaders have been much more lukewarm on Brexit than leading Republicans.

Mr Biden was vice-president in an administration that put itself squarely behind David Cameron’s Remain campaign, notably clashing with Mr Johnson in the process.

Mr Biden said in Dublin the day after the referendum: “We’d have preferred a different outcome.”

He then lashed out at the “reactionary politicians and demagogues peddling xenophobia, nationalism and isolationism” in Europe and the US.

The US Democrat even described Mr Johnson as a “Britain Trump”.

Despite the daunting challenge, achieving a trade deal with the US under a Biden administration might not be impossible for Mr Johnson.

Dame Karen Pierce, who arrived in Washington as Britain’s ambassador in March, could be the Prime Minister’s key to success.

“Sir John Major had to transition from working with a Republican President, George Bush Sr, to his Democratic successor, Bill Clinton.

“That experience may offer a cautionary tale. The incoming Clinton administration believed that the Major government had tried to help his rival in the 1992 election by searching Home Office records in an attempt to substantiate rumours that Mr Clinton applied for British citizenship while studying at Oxford to avoid the Vietnam draft.

“The Prime Minister wrote a letter of apology to President-elect Clinton, saying that the Home Office had made the search after a request from The Washington Post, not him.

“When he flew to Washington on a working visit in December 1992, Mr Clinton declined to meet him.