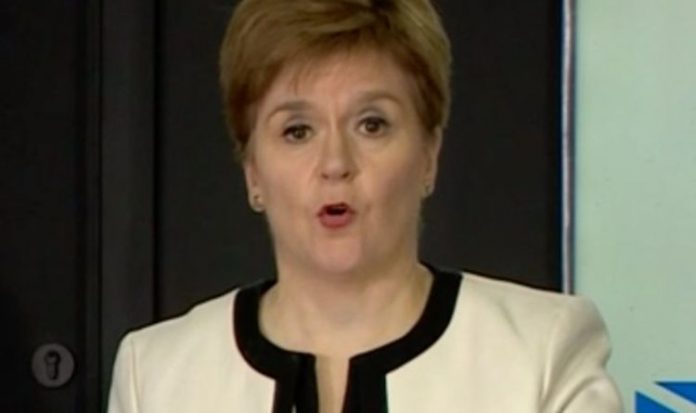 Nicola Sturgeon said a surge in coronavirus test requests cause a series of “technical difficulties” which caused a “strain” on the booking portal. The Scottish First Minister was forced to apologise after an unexpected surge in demand resulted in some Scots being asked to have their test conducted across England or Northern Ireland instead of local testing facilities. Ms Sturgeon insisted contingency plans have now been put in place to address any future spike in test requests and three additional mobile testing units will be deployed across Scotland before the end is out.

Ms Sturgeon said: “Over the weekend, there was a major spike in demand for testing, not just in Scotland but we think across the UK, and that led to some constraints on the booking portal throughout the day yesterday.

“That in turn resulted in a surge of calls to our COVID-19 helpline. I know this will have been frustrating to people trying to book a test, so I want to thank everyone for bearing with us as we work to address these issues and I just want to talk through some of the work that is being done to do just that.

“Some of what I would describe as technical issues, for example people in Scotland being offered tests at centre outside Scotland, are being resolved, that shouldn’t be happening.

“There any technical issues does arise, unfortunately, with a system of this scale and complexity, we will endeavor to get those sorted as soon as possible.”

JUST IN: Danger of a ‘Swiss Brexit’ as critical referendum sparks panic in Brussels

But Scots have expressed their fury at the shambolic management of the testing efforts, with some taking to social media to challenge Ms Sturgeon on the delayed delivery of test results.

One user wrote: “@NicolaSturgeon has the increased demand in tests over the weekend impacted how quickly test results come back?

“Four of us tested yesterday and not had a response, friends tested at the weekend with no result. Is this reflected in the 0.8% of positive tests yday?”

“How on earth are we going to get through winter. Scot Gov has been given the funding what are you doing with it ? No testing no antibody testing! Useless.”

And another wrote: “@NicolaSturgeon what is happening with these COVID test? My autistic great grandson was tested 10am saturday and I cant get a result.”

Ms Sturgeon insisted contingency plans are already being rolled out, and increase testing capacities will be available this week.

The First Minister said: “On the issue of capacity, which is the most significant issue, we have always known there would be fluctuations in the demand of tests and that’s why we have contingency plans in place and these contingency plans are already being activated.

“For example, over the course of this week we will be deploying three additional mobile testing units across the central belt of Scotland.

In her daily coronavirus update, the First Minister said the total number who have tested positive is now 19,921.

There was no increase in the number of people who have died within 28 days of a positive test and this remains at 2,492.

The latest daily figures showed that 0.8% of those tested for the virus were positive.