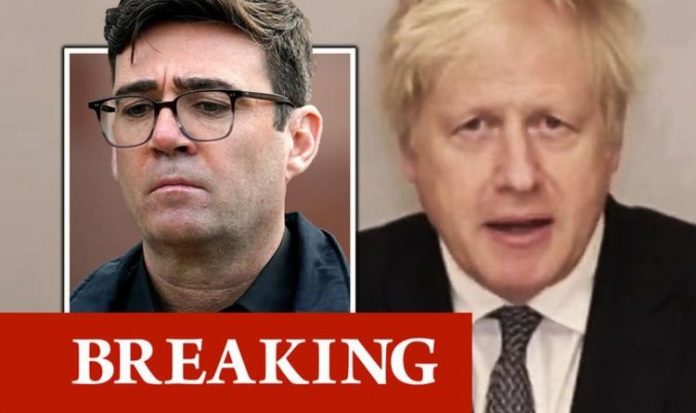 On Monday afternoon Mr Johnson outlined new measures people in England will face once the current lockdown is lifted on December 2. The Prime Minister explained the three-tiered approach will return, which previously saw Greater Manchester, the Liverpool City region and Lancashire all placed into Tier 3 before the national restrictions began on November 5. Speaking to MPs in the Commons through a video link from his coronavirus self-isolation in Downing Street this afternoon, Mr Johnson made it clear that there will be no “negotiations on additional measures”. This appeared to be a swipe at Mr Burnham, who hit the headlines in October after he condemned the Government’s approach to placing Greater Manchester into Tier 3.

“So from the 10pm closing time… we’re going to change so that it is last orders at 10 with closing at 11.

“In tiers 1 and 2 spectator sports and business events will be free to resume inside and outside with capacity limits and social distancing, providing more consistency with indoor performances in theatres and concert halls.

“We’ll also strengthen the enforcement ability of local authorities, including specially trained officers and new powers to close down premises that pose a risk to public health.”

But the Prime Minister warned the new measures will be tougher, including the tier system potentially lasting until March.

He said: “I’m sorry to say we expect that more regions will fall at least temporarily into higher levels than before.”

READ MORE: Families can hug loved ones in care homes with radical tests

He told MPs: “This virus is obviously not going to grant a Christmas truce, it doesn’t know it’s Christmas and families will need to make a careful judgement about the risk of visiting elderly relatives.

“We will be publishing guidance for those who are clinically extremely vulnerable on how to manage the risks in each tier as well as over Christmas.”

His announcement came after Mr Burnham called on the Government to avoid blanket restrictions when the lockdown is lifted.

Speaking on BBC Breakfast on Saturday morning, he said: “The view we’ve put to the Government is ‘please don’t just make blanket closures happen’, we think it’s much better to look at a targeted approach.

“I would say, ‘let the gyms open, let the leisure centres open’ – they are going to be so important to people, particularly when it is harder to exercise outdoors.

“The 10pm curfew, I don’t think that was working early this year and I am absolutely certain it won’t work in the run-up to Christmas. It will get more and more difficult to implement.

“What we are saying to the Government is bear in mind what everyone has been through and make judgments based on how manageable the situation will be.

“We need simpler, clearer messages to the public, but also something that is not going to make their life very, very hard to manage, particularly as we run into Christmas.”

Earlier this year, a video clip of Mr Burnham went viral that showed his reaction to the news that Manchester’s Tier Three lockdown funding had been set at £22million.

It came after the Manchester Mayor stood firm in negotiations with the Government over the lockdown and demanded more funding to help the region manage the stricter measures.

During his announcement this afternoon, Mr Johnson added that he is “very sorry” for the “hardship” that such restrictions will cause business owners.

He added a further announcement is likely on Thursday to explain which areas will fall into which tier.

He said: “I’m sorry to say we expect that more regions will fall at least temporarily into higher levels than before but by using these tougher tiers and by using rapid turnaround tests on an ever greater scale to drive R below one and keep it there, it should be possible for areas to move down the (tier) scale to lower levels of restrictions.”