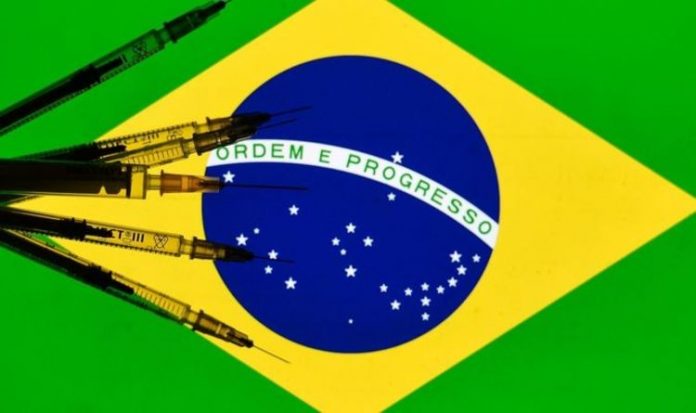 Six cases of the P1 variant of COVID-19, first identified in Manaus, have now been identified in Britain. Public health officials are racing to find one of the cases in England who didn’t fill in their registration form when they took a home coronavirus test – resulting in a P1-positive test with no details attached.

Could this extend lockdown?

The concern around this new variant of the coronavirus is that it could be resilient to the vaccines being rolled out.

The Brazil variant is also said to spread more easily and rapidly.

While only a handful of cases have been identified, authorities are warning that, if the situation continues to spiral out of control, it could delay the end of lockdown and hamper summer plans.

READ MORE:  Covid vaccine: Which is the best vaccine to have? Can I choose?

A member of the government’s Scientific Advisory Group for Emergencies (Sage) said the new strain could force the UK to “go backwards” in terms of relaxing restrictions.

Speaking to the BBC, Graham Medley, professor of infectious disease modelling at the London School of Hygiene and Tropical Medicine, said: “It is a variant of concern but we are going to be faced with these in the next six months as we move towards relaxing measures.

“There are going to be challenges on the way – and there is always a risk that we might have to go backwards, and that’s what nobody wants to do is to actually open up and then have to close down again.”

Boris Johnson has sought to reassure the public about the variant, saying there is no evidence yet to suggest it would be able to evade vaccines.

Speaking to the media during his visit to a school in Stoke-on-Trent on Monday, the Prime Minister said: “Our whole strategy is to go forward in a way that is cautious but irreversible. And we don’t think that there’s any reason on this basis to change that now.”

Pressed by ITV News on whether the new strain could impact the roadmap out of lockdown, vaccines minister Nadhim Zahawi said one of the tests that must be met before lifting lockdown is whether new strains mutate to escape vaccines.

He said: “One of the reasons we have those four tests – and the Prime Minister outlined very clearly that we will look at four weeks plus one, ie five-week intervals between each step of reopening the economy – is to allow us the time… to look at the behaviour of the virus.”

He added: “We will take it deliberately cautiously and slowly as we open up, but it will be driven by the data.”

Key to preventing the Brazil variant from becoming dominant in the UK and thwarting plans to open the economy will be to identify all cases through testing.

Mr Zahawi told BBC Radio 4’s Today programme: “One of the strengths of the UK’s system is obviously our genome sequencing capability; we account for just shy of 50 percent of all the sequencing of the different variants of COVID-19.

“We would pick up, as we have done obviously in these cases, pick up rapidly, both in terms of PCR testing capability – 800,000 capacity per day – and millions of lateral flow tests.

“We would pick up community transmission of this variant very, very rapidly, because we are able to genome sequence so quickly.”

While time will tell whether the cases of the Brazil variant spread out of control, others are forecasting the variant is likely to make summer holidays abroad impossible.

Labour MP Yvette Cooper, chair of the Home Affairs Committee, told BBC Radio 4’s Today programme: “There is a concern about whether the government is raising expectations about summer holidays that they may not be able to meet, because this will depend on the relationship between the spread of these new variants and what happens with the vaccine, and the timetable about things like boosters for the vaccine.

“The trouble is at the moment, the government is encouraging people to think that those summer holidays are all going to be possible and international travel is going to return.”

Further critics of the government have said the arrival of the Brazil variant exposes weaknesses in the UK border protections against new strains such as this.

Mr Zahawi defended the UK’s border controls, telling the Today programme: “I would say to you that the border controls that we have are pretty stringent.

“Even countries that had hotel quarantine, like Australia, still have to deal with the variants actually challenging them in the same way they challenge us.”

PHE is urging everyone to stick to the current Covid regulations to prevent further outbreaks and allow the unlocking of society to progress.

Officials are asking anyone who took a test on 12 or 13 February and who has not received a result or has an uncompleted test registration card to come forward immediately by calling 119.