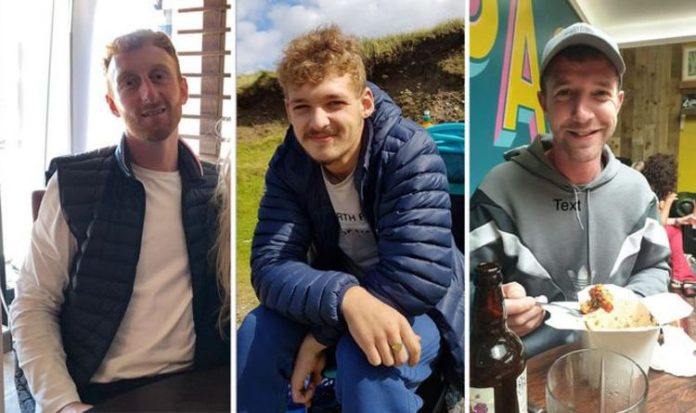 The crew were on-board the Nicola Faith.

The 10-metre-long boat failed to return to port at Conwy in north Wales after a fishing trip.

When the boat disappeared in January the RNLI along with various Coastguard teams spent 2 days looking for the fishermen.

There was a major search effort involving search teams and volunteers, but the men and their boat are yet to be located.

A crowdfunding page has been set up by Alan Minard’s mum Nathania Minard to raise funds for a private search.

The crowdfunding page reads: “We are now trying to raise the necessary funds for a private search by experts who we believe have the best chance of enabling us to bring our lads home.

“We cannot fund this alone and we need the support of all who can help.
Not knowing is one of the hardest parts to deal with as it leaves the families with so many unanswered questions.

“Closure is critical to enable the family’s to move forward, remember the good times rather than worry about what happened on that fateful day.”

The online fundraising page raised more than £7,500 in 24 hours.

So far £10,434 has been raised to pay for the cost of a private search by the team who found the Cardiff City FC footballer Emiliano Sala.

The crowdfunding page goes on to say: “The search will not be cheap hence the fundraising target but every little will help. We will make sure it does!

“Any remaining funds after we find them will be used towards a memorial in honour of the men, the local community and three broken families.”

Carl is described as: “a hard-working skipper with a partner and family who are immensely proud of his achievements”.

Ross is said to be: “devoted father whose two boys desperately long and wait for his return”.

Meanwhile, Alan is described as: “20 years old and full of dreams, his smile would light up any room.”

To find out more about the fundraiser and to donate, visit the Crowdfunding page here.