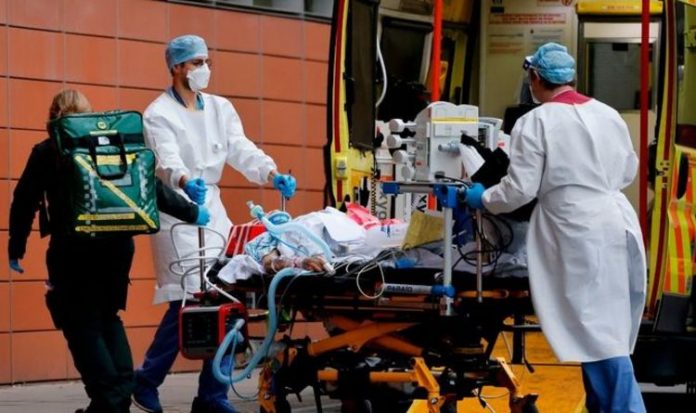 Research on the latest variant, known as P1, among people living in the Brazilian city found high levels of reinfection, and that this variant is in fact more transmissible than the original Covid pandemic strain. The new research from organisations including Imperial College London, Oxford University and the University of Sao Paulo showed blood studies suggest more than two-thirds (67 percent) of people in Manaus had Covid by last October. The Brazilian city experienced another huge wave of Covid infections in January, forcing experts into quick action to find out the reasons why.

Their studies revealed the proportion of Covid cases that were the P1 variant grew from zero to 87 percent in just eight weeks.

The P1 variant was found to be between 1.4 and 2.2-times more transmissible than other CVOID-19 strains in Manaus, and was found to provide between 25 percent and 61 percent of protective immunity from previous infection.

Dr Nuno Faria, reader in viral evolution at Imperial, told a briefing: “If 100 people were infected in Manaus last year, somewhere between 25 and 61 of them are susceptible to reinfection with P1.”

The expert warned more research is required on patterns that might occur in other countries.

He added: “We know that vaccines are effective and they can protect us from infection and from disease and death.

“This is a period to be optimistic about the future. The more we know about the virus, the better we’re able to protect against it and I think there’s no concluding evidence to suggest at this point that the current vaccines won’t work against P1.”

Sharon Peacock, executive director and chairwoman of the COVID-19 Genomics UK (COG-UK) consortium, and professor of public health and microbiology at the University of Cambridge, said the P1 strain had already been detected in 25 countries.

But she warned the new research should not be used to guess the effectiveness of vaccines or how things will “pan out in other countries including the UK”.

“I think what it reflects is the fact that… what these variants will mean is that the vaccine manufacturers will be looking to make adaptations to the vaccine so that people can have boosters and some of those adapted vaccines are already being tested in clinical studies.

“So, I think it’s a note of optimism, but also a note that we need to go forward and work with vaccine developers to ensure that over time we have vaccines that are effective for our population.”

Health experts do not think the Brazilian variant is more transmissible than the one identified in Kent.

Researchers at the briefing said the six cases of the Manaus variant that have so far been identified are low, and it would take multiple introductions of the Covid strain for it to significantly take off.

Dr Thomas Mellan, from Imperial College London, also revealed researchers found an increased risk of death from P1 in the Brazilian city, but cautioned it is an area of the country with “substantial healthcare failure”, such as a lack of oxygen.

Earlier today, Health Secretary Matt Hancock said the hunt for the mystery person infected with the Brazilian variant had been narrowed down to 379 households in the South East of England.

So far, three cases of the new Covid strain have been identified in England, with the remaining three in Scotland.

But a public appeal has been made for one of those people to come forward after they took a test in February but did not leave any contact details.

Mr Hancock told MPs in the House of Commons this appeal had resulted in a number of leads.