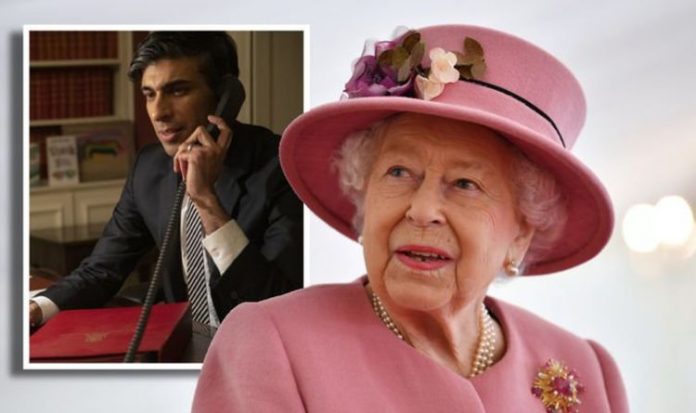 Queen Elizabeth II has had a hectic few days, with her husband Prince Philip moving hospital and work engagements to attend. Now the Queen has spoken with Chancellor of the Exchequer Rishi Sunak ahead of the highly anticipated budget on Wednesday.

The Queen speaks with Prime Minister Boris Johnson weekly as part of her royal duties, but the phone call with the Chancellor ahead of the annual Budget is a royal tradition.

HM Treasury tweeted a picture of Mr Sunak on the phone captioning the image: “Ahead of #Budget2021 tomorrow, the Chancellor @RishiSunak today had a traditional pre-budget audience with the Queen.”

This was then retweeted by The Royal Family who added: “Earlier this evening, The Queen held an Audience via telephone with the Chancellor of the Exchequer, the Rt. Hon. Rishi Sunak MP.”

Traditionally, before the Budget is presented, the Chancellor of the Exchequer will have an Audience with The Queen.

The official royal website explains the Queen has held a weekly Audience with her Prime Minister throughout her reign in order to discuss Government matters.

Before the pandemic, the audience was held in an Audience room in her apartments and is entirely private.

Though the Queen must remain politically neutral on all matters, she is able to ‘advise and warn’ her ministers – including her Prime Minister – when necessary.

On Monday the Queen made her first-ever video call to Australia, unveiling a statue of herself.

Dialling in from Windsor Castle the Queen spoke with the governor of South Australia Hieu Van Le and the state’s premier Steven Marshall.

Referencing the new statue she said: “I would think possibly it might be quite alarming to suddenly see it out of the window – you’d think, gracious, has she arrived unexpectedly?”

The new statue has been placed in the grounds of Government House in Adelaide, South Australia.

The commemorative piece depicts the Queen in a coat and hat, carrying her iconic Launer bag.

Despite the upheaval of her husband Philip, 99, being in hospital and the news of Meghan Markle and Prince Harry’s no holds barred interview the Queen was all smiles.

After being told her statue had become a popular spot for photographs the monarch laughed and said: “Oh really?”

The Queen’s former press secretary Dickie Arbiter wrote on Twitter: “Despite being thousands of miles away in Windsor Castle the Queen, with her stamina, commitment, sense of humour, and, all the while Prince Philip is in hospital, has unveiled a statue of herself in Australia.”

Philip has been in hospital for more than two weeks and is expected to remain there until at least the end of this week.

The Duke of Edinburgh was first admitted on February 16 for treatment for an infection.

On Monday he was transferred to St Bartholomew’s where he was under observation and receiving tests for a pre-existing heart condition.

A Buckingham Palace spokesman said: “The Duke of Edinburgh was today transferred from King Edward VII’s Hospital to St Bartholomew’s Hospital where doctors will continue to treat him for an infection, as well as undertake testing and observation for a pre-existing heart condition.