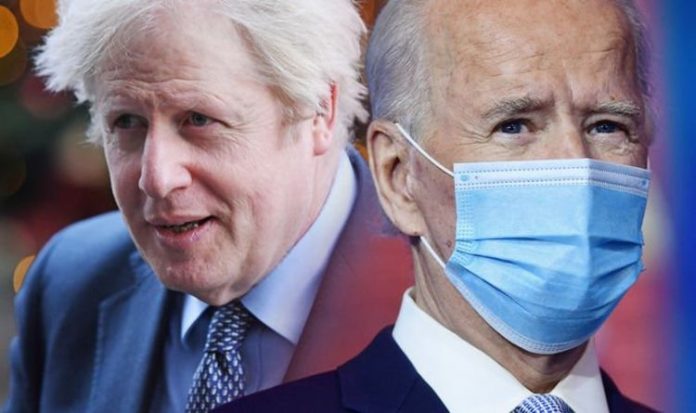 Joe Biden piled the pressure on Prime Minister Boris Johnson in the lead-up to his eventual US election victory last month. While campaigning, the Democrat criticised the UK for its approach to Brexit as the Government infuriated the EU with the Internal Market Bill. Mr Johnson wanted to make changes to the already agreed Northern Ireland protocol, sparking a legal challenge from the European Commission. The now US President-elect warned Mr Johnson that peace on the island of Ireland – preserved by the Good Friday Agreement – must not be a “casualty” of Brexit.

Pro-EU Conservatives are concerned that a no deal outcome will lead to tension between London and Washington and put the ‘special relationship’ at risk.

Baroness Nicky Morgan warned earlier this month that Mr Johnson may need a deal with the EU soon to save the relationship with the US.

She said: “I think the PM will not want the first conversation he has with Biden to be about Northern Ireland, Brexit and no deal. Getting a deal will make that conversation much easier.”

Expert on US politics, Dr Nigel Bowles, told Express.co.uk that Mr Johnson will have to make concessions to the EU in order to ensure the UK keeps hopes of a US trade deal alive.

The Oxford University academic said: “A trade deal can be done, but any Prime Minister who calculated that either a US President would fold on the Good Friday Agreement, and fold on the EU agreement on the border, should think again.

This echoed warnings from another expert – Professor Stephen Burman – who told Express.co.uk that Mr Biden will want to “teach the UK a lesson” for trying to modify its Brexit agreement with the EU.

The Internal Market Bill is still in Parliament as the House of Lords continue to scrutinise the controversial move by Mr Johnson.

Lords voted for steps to force Westminster to seek the consent of Wales, Scotland and Northern Ireland before ministers are allowed to exercise powers contained in controversial legislation, with a majority of 77 votes.