The UK may have only exited the transition period at the start of 2021, but significant differences between the way in which the EU and Britain are run have already appeared. Brussels was left red-faced after its latest vaccine debacle, which saw the bloc temporarily abuse the emergency clause of the Northern Ireland Protocol, stunning the international community. The EU is also trailing behind both the UK and the US in its vaccine rollout, having signed contracts with key developers months after its Western allies — meaning its post-pandemic recovery still seems to be a long way off.

Most crucially, it signed a landmark investment deal with China just a month before Joe Biden was sworn into the White House — despite his pleas to hold off until he had officially become US President.

He explained: “It [the UK] has shown push back against Chinese aggression and put the step on Huawei, it has propped up its defence budgets, putting its money where its mouth is, which did not go unnoticed in Washington, at a time when some other allies have dragged in military spending.”

The UK took a bold risk when it announced that the Chinese telecoms giant was to be cut out of Britain’s 5G network due to both British and American concerns over security leaks going back to China.

In the meantime, Huawei is steadily moving into the EU and Germany has drafted a bill for it to play a huge part in turning Duisburg into a smart city.

Britain has also spoken out against both China’s violation of its 50-year Joint Declaration that Hong Kong would remain a ‘Special Administrative Region’ until 2047.

Hong Kong protests against China’s crackdown in recent years have stunned the international sphere, as Beijing continues to threaten democracy in the region.

The UK has since offered citizenship to 5.4 million Hong Kong nationals, despite China’s warnings that Britain should not meddle in “domestic issues”, again showing it shares Mr Biden’s appreciation for international democracy.

Just last week, Westminster stood alongside Washington in condemning the treatment of more than a million Uighurs and other minorities who have been detained in Chinese camps.

But the UK and the US are not just ideologically aligned, according to Mr Rough.

He explained that the UK also “has prospects and is eager to cut a trade deal at a time when it is unlikely we are going to get an EU-US trade deal”.

The commentator continued: “We couldn’t get it before during the late stages of the Obama years, when there was a sort of soft globalism, since then some protectionist winds have swept America.

“I think including the pandemic which makes the Biden administration rather inward-focused.”

The commentator, who was the director of research under George W Bush, claimed that it’s therefore incredibly unlikely that there will be a deal with the EU any time soon — but that’s not the case when it comes to Britain.

Biden with German Chancellor Angela Merkel, a figurehead within the EU (Image: Getty)

He explained: “With the UK, there’s a lot more flexibility there.

“There is a lot more potential and possibility.

“Britain has, I think, an incredible amount to offer the US.

“[But] if there is one headwind, at a time when Brexit and Trumpism are seen as part of the same phenomenon, and the Biden administration are unsympathetic to Trumpism — to put it lightly — that could be a problem.”

Joe Biden’s cabinet have been ‘aggressive’ to China says expert

He has been accused of being the “inciter-in-chief” of the astonishing Capitol Hill riots, where his supporters directly challenged the democratic result of the November presidential election.

Although Mr Johnson spoke out against such actions and condemned the “disgraceful scenes” of the riot, he has often been compared to Mr Trump in the past.

The former President even called him “the Britain Trump”.

Mr Rough also warned that Washington will be hearing the whispers from continental Europeans who “regularly trash” Mr Johnson and “try to tarnish his reputation” after the Brexit negotiations strained EU-UK relations.

However, he added that this ideological stance from Brussels was unlikely to seriously affect US-UK relations, especially in the face of Mr Johnson’s recent success with the vaccine rollout in comparison to the EU’s struggles.

Johnson on his first phone call with Biden after his inaguration (Image: No 10)

Mr Rough concluded: “All the steps the UK has taken are nothing but encouraging.”

Indeed, Mr Biden did choose to call Mr Johnson first out of all the European leaders following his inauguration.

However, it is worth noting that the Biden administration has signalled it is not looking to make any international deals soon.

Mr Biden is clearly focused on domestic policies following the disastrous insurrection on Capitol Hill last month and the deep ideological divisions between the US public.

Washington also omitted any mention of future trade deals when informing the press as to what the two world leaders discussed on the phone. 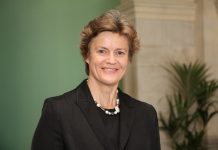