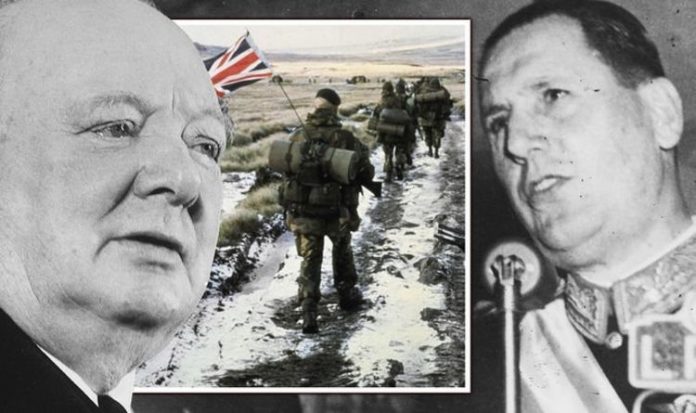 The UK and Argentina have long argued over the sovereignty of the Falklands, which boiled over into conflict when the South American country invaded in 1982. The war lasted 74 days and ended with more than 900 casualties and an Argentine surrender. But declassified files appear to show Buenos Aires tried to buy the British Overseas Territory 30 years earlier.

In 1953, Argentine President Juan Peron had an offer sent over to the Foreign Office but was told the sale would “cause the overthrow of the Government,” according to papers.

The offer was reportedly tabled to Sir Winston Churchill, serving his second spell as Prime Minister at the time, by Rear Admiral Alberto Teisaire at a private meeting at London’s Park Lane hotel.

The documents did not give specific details of the proposal, but quoted Mr Teisaire as saying Argentina “wished to see Anglo-Argentine economic relations put on a firm basis”.

But this also reportedly meant that, as part of a long-term arrangement, Britain “should surrender all rights and claims to the Falkland Islands”.

The report said Lord Reading, the Foreign Secretary at the time, rejected a deal because “the inhabitants of the Falkland Islands were British, and if a plebiscite was held, they would vote practically unanimously to remain under the British flag”.

The document added that “the Admiral agreed that this was probably true”.

It also said that Lord Reading told the Argentine naval officer that “it was inconceivable that any Government should consider the sale of the Islands”.

He added: “If they were to do so there would at once be a tremendous outcry from the public, and the Government would certainly be overthrown.”

The papers were released by the Foreign Office after a 30-year restriction in 1984.

Other documents have also shown that Sir Winston had concerns over a potential Falklands invasion.

The war hero personally intervened to block a proposed sale of British helicopters to Argentina the same year.

Buenos Aires had expressed interest in buying several British owned Sikorsky S-55 – known as the Whirlwind – stating they would only be used for communications and air-sea rescue work.

Sir Winston’s concerns over the Falklands and other British South Atlantic territories had already caused him to deploy a Royal Navy frigate, HMS Snipe, to the area.

An Argentinian naval tugboat, the Chiriguano, had established a hut, tent and flag on Deception Island, part of the Antarctic South Shetland Islands.

The former Prime Minister called for an immediate report on the risks of the helicopter sales.

They found that the threat to British territories in the area would not be substantially increased by Argentina’s acquisition.

The report said: “In the unlikely event of war between ourselves and Argentina, the addition of helicopters would not have any effect on the ability of the Argentine to capture the Falkland Islands, since she already has a heavy preponderance of air and naval forces in the area and, using surprise, should be able to do so without difficulty.

“In any case, the distance of the Falkland Islands from the Argentine mainland is such that S-55 helicopters would be operating at extreme range and an insignificant payload.”

However, they added that were the helicopters to be based on Argentina’s claimed territory in Antarctica, they could be used to threaten British outposts in the Antarctic Dependencies.

The Cabinet decided to block the sale.