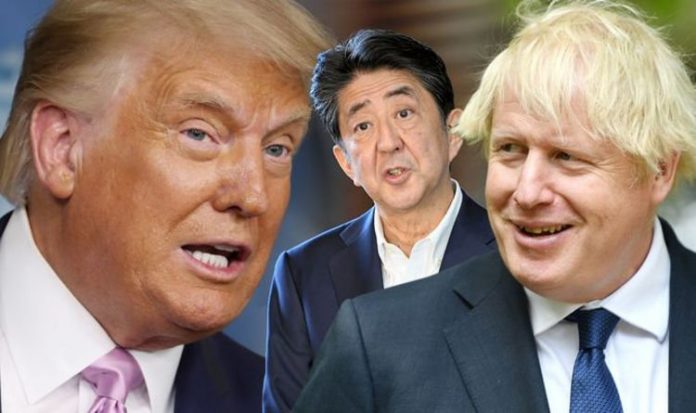 The EU’s chief Brexit negotiator, Michel Barnier, has warned that a trade deal between the UK and EU “seems unlikely at this stage”. His concern came after the latest round of talks ended no closer to a deal than before. Mr Barnier said he was “disappointed” and “concerned” at the way negotiations were lagging.

Much of the failure to come to an agreement came amid differences on fisheries policy and state aid rules.

The EU has said it would like to agree a deal by October so it can be approved by the European Parliament before the post-Brexit transition period expires.

The transition period ends on December 31.

Brexit: The UK’s membership of the CPTPP could create the ‘highest of high-grade’ trading blocs’ (Image: GETTY)

Brexit talks: Negotiations have faltered at every possible point between the UK and EU (Image: GETTY)

Britain will trade with the EU on World Trade Organisation (WTO) rules should a deal not be secured by then.

This means most UK goods would be subject to tariffs until a free trade deal was ready to be brought in.

Securing a deal is one of a handful of pressing issues Prime Minister Boris Johnson’s cabinet is currently working on; yet his government is also looking further afield to secure trade deals with countries it previously couldn’t as a result of being in the Eurozone.

One trading bloc it could join, Sean King, senior vice-president of Park Strategies in New York and an affiliated scholar at University of Notre Dame’s Liu Institute, said was the CPTPP.

Should the UK join, he claimed that the US – which dropped out in 2017 – might be inclined to reconsider its membership; thus potentially creating the “highest of high grade trade agreements”.

He explained: “If the UK and US joined the trading bloc would become one of the world’s biggest economic players.

“Before the US left we comprised 40 percent of world GDP.

“So together with the UK it would really be a formidable force.

Boris Johnson: The PM has been on holiday in Scotland in the last week (Image: GETTY)

“Right off the bat you’d have the number one and number three largest economies with the US and Japan, and then you add to that Britain.

“It would really set the standards, it would be the highest of high grade trade agreements.”

US President Donald Trump dropped out of what was then known as the Trans-Pacific Partnership (TPP) in 2017.

He claimed the US had a bad deal.

Yet, Mr King still believes that joining might appeal to the US – regardless of who is in the White House – should the UK become a twelfth member.

He said: “I still believe that the US will rejoin the CPTPP because it makes sense, especially given this new geopolitical reality that we find ourselves in.

“If Donald Trump were to win reelection given his good rapport with Boris Johnson, perhaps the UK joining CPTPP might be enough for Trump to reconsider his exit.

“If he can get some key plans renegotiated, his China trade deal doesn’t go through, and he too could say ‘listen I don’t love multilateral deals but we’re in a new world, we’ve got to be creative post Covid, China’s the real problem here, my good friend Boris says it’s ok, I’m gonna do it.'”

CPTPP: The bloc is made up of Latin American, Asian, North American, Oceania and Pacific countries (Image: GETTY)

For the US, it would also add the benefit of placing a trade wall between China and the members of the CPTPP, Mr King argued.

On the issue of Joe Biden, the Democrat nomination for the presidency, Mr King said: “I think Biden would be open to bringing Washington closer to TPP – he won’t admit it now but I think he would.”

It has, however, soon become a bubble in which many member states can confidently trade without having to make “moral compromises”.

Many of RCEP’s members are also members of CPTPP which could throw into question potential conflicts of interest between those who occupy both trading blocs and China.