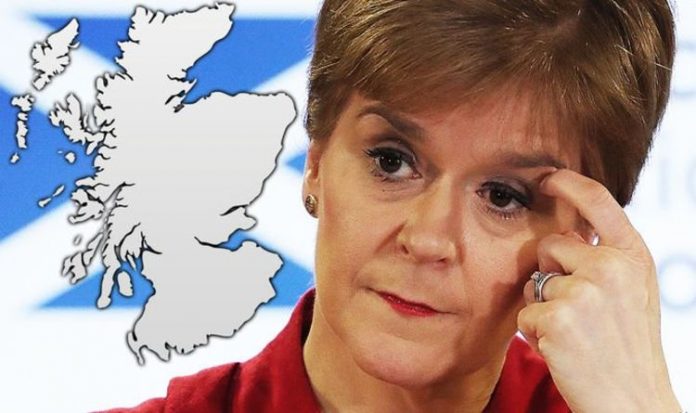 Scottish Conservative councillor Tony Miklinski told Express.co.uk that Scottish independence would be disastrous for Scotland’s economy. He added that a hard border would be needed between Scotland and the rest of the United Kingdom which would result in travel and trade constraints.

Mr Miklinski said: “I think it would be disastrous.

“If you can believe what Nicola says she will take us back into the European Union, so she will get her economic freedom from the UK and the impose a Brussels bureaucracy instead.

“The border with the rest of the UK would almost certainly have to be a hard one.

READ MORE: Nicola Sturgeon warned her EU dream could be in tatters

“You saw the kind of images we got when the SNP supporters were parading along the border telling the English to go home.

“That is just a small flavour of what is to come.”

He added: “I genuinely think that impact on our economy would be catastrophic.

“This is an emotional argument based off heartstrings and I hope that people are sensible enough not to do what would amount to be an act of self-harm economically.”

“She knows all this and yet she is willing to drag us over the cliff of independence and probably walk away from it and say it is somebody else’s problem now.”

He continued: “The economic case for independence has never been made they tried basing it on the price of oil last time and that would have been catastrophic

“Post pandemic we need to get our economy moving, we need to get it thriving and the way to do that is by cooperating with Westminster, to have a cooperated Government here in Scotland, doing the best thing for employment and the general welfare of the Scottish people.

“That is not Nicola’s ambition, Nicola wants independence which is a very different thing.”