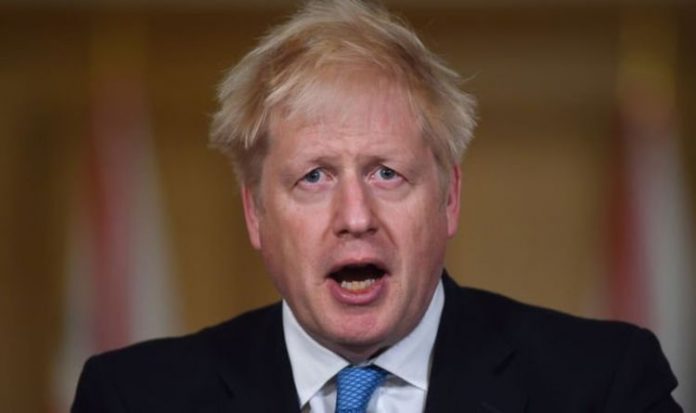 The Prime Minister said the UK can completely sever ties with the bloc with “high hearts and complete confidence” as he dramatically announced plans for a No Deal Brexit would be ramped up.

He accused Brussels of “effectively ending” trade talks and said the UK would step up its preparations for an “Australia-style” World Trade Organization (WTO) agreement.

And he made clear that EU officials should only bother trying to negotiate any further if they have a “fundamental change of approach”.

“For whatever reason, it is clear from the summit that after 45 years of membership they are not willing – unless there is some fundamental change of approach – to offer this country the same terms as Canada.

The Prime Minister announced plans for a No Deal Brexit would be ramped up (Image: Getty)

“And so, with high hearts and complete confidence, we will prepare to embrace the alternative.

“And we will prosper mightily as an independent free-trading nation, controlling our own borders, our fisheries, and setting our own laws.”

Downing Street suggested his trip would be pointless unless the EU shifted its position.

The Prime Minister’s official spokesman said: “There is only any point in Michel Barnier coming to London if he’s prepared to address all the issues on the basis of a legal text in an accelerated way, without the UK required to make all the moves or to discuss the practicalities of travel and haulage.

“If not, there is no point in coming. Trade talks are over. The EU have effectively ended them by saying they do not want to change their negotiating position.”

It has been agreed that Mr Barnier will speak with his UK counterpart David Frost next week. Mr Johnson had set the two-day European Council summit, which ended yesterday, as the deadline as to whether there was a deal to be done.

But negotiations remain locked in stalemate in several key areas, including post-Brexit fishing rights, with both sides appear to be engaged in a game of brinkmanship as the clock ticks down.

While German Chancellor Angela Merkel said: “I believe it would be in the interests of both sides to have an agreement although we also have to prepare for the alternative.” The UK and EU had been hoping for a “zero-tariff” agreement to govern their trading relationship.

If a deal is not done, the UK will trade with the EU according to the WTO’s default rules.

In this scenario, which Australia follows, the EU would impose its tariffs on imported goods – pushing up the costs of items such as food and cars – and the UK would reciprocate.

Mark Rutte insists any negotiation would see each party give up part of their demand (Image: Getty)

BORIS Johnson could not have been clearer today or for that matter over the past year.

All Britain wanted was a similar deal that the EU had already agreed with Canada and to be allowed to get on with life as an independent nation.

But it appears that even at this late hour such a simple wish is too difficult for the ideologues in Brussels who apparently still entertain the fantasy that they can browbeat this country into becoming a vassal state and punish us for having the audacity to quit their toxic club.

Well, the Prime Minister certainly gave them a wake-up call yesterday. The talks are effectively over unless there is a massive change of heart on their part.

We will not be handing over our fish, we will not be taking their rules, we will not be subject to their dubious European Court of Justice. If the four years have taught us anything, it is that the EU cannot be considered friendly neighbours, quite the opposite.

As Michael Gove told the recent Blue Collar Conservatism/Express conference, we spent three years after the referendum trying to be reasonable and got nothing but humiliation in return.

But as Mr Johnson said yesterday, this country can look forward to being “mightily prosperous” even without a trade deal with the EU.

We will be able to pocket billions extra in tariffs from them, more than enough to subsidise businesses which have to sell into the EU.

Now we have a trade deal with Japan the world is opening up. The US and Australia will follow soon and it won’t be Germany selling us their cars. A bright future awaits Britain and if the EU does not want to be part of that, it is their loss.