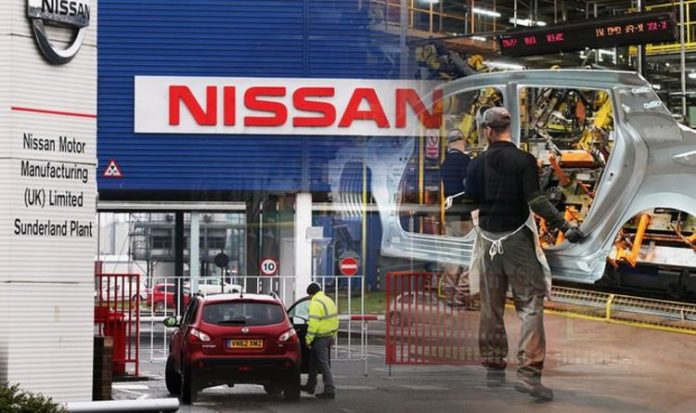 The event saw dozens of people gather who want to ensure the future of the car plant is secured in the North East. People taking part in the vigil included A-Level students, retail workers, retired people, health professionals, teachers and an engineer – all of whom are concerned about the impact a no deal Brexit might have on the local and UK economy. The latest plea made by locals towards the UK Government on Friday night, following a demonstration outside the same Nissan car plant in June.

That came a week after Nissan’s Global Chief Operating Officer Ashwani Gupta warned without tariff-free EU access, the car manufacturing giant may have to leave and close the huge plant in Sunderland.

Louise Brown, who lives locally and was among the group holding the late-night vigil, warned time is running out for the UK to agree a post-Brexit trade deal with the EU.

She told the Sunderland Echo: “It went really well with lots of honks of support from workers coming in and out of the factory with some stopping to chat to ask us more about why we were there.

“Workers appear to feel very worried about the situation as we now don’t have long to strike a deal.

“Holding a vigil outside the Nissan plant allowed us to express our sadness that this much-needed factory may close in the event of a no-deal Brexit as their CEO announced in June.

Ms Brown insisted although time is running out to strike a deal, this can still be achieved over the coming weeks, which could save hundreds of jobs at Nissan in the North East city.

She continued: “We all know how much the area depends on Nissan for employment.

“We did it at night to also show solidarity with the late shift workers.

Boris Johnson, as well as senior Cabinet ministers, including Michael Gove, have insisted a free trade agreement must be struck before the end of the transition period.

This is a deadline the Government and UK negotiators have refused to extend.

Trade talks between the UK and EU began in March but several rounds of talks have ended in stalemate and five months on, little progress has been made.

Both sides have lashed out at each other during talks and are so far refusing to give any ground on crucial red lines such as fishing access, the level playing field and state aid.

The latest round of talks begins in Brussels on Monday.

The UK and EU want a deal agreed by next month, so it can go through a lengthy ratification process in the European Parliament in October.