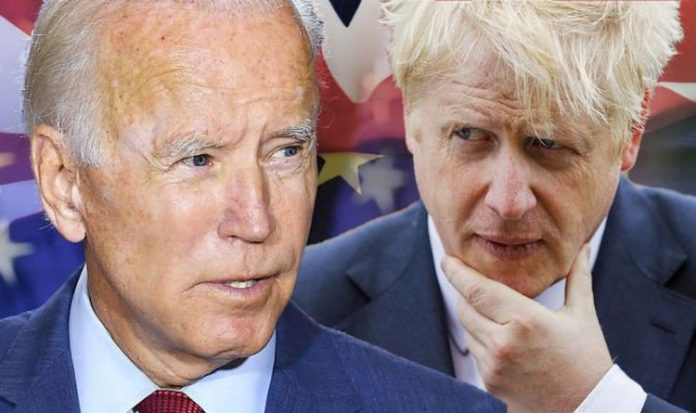 Joe Biden, the Democrat candidate for US President, hit out at Prime Minister Boris Johnson for his Brexit strategy – specifically the Internal Market Bill. The Internal Market Bill was passed by Parliament, aiming to override the withdrawal agreement by making changes to the Northern Ireland protocol. Northern Ireland Secretary Brandon Lewis even admitted in Parliament this could break the law. The legislation also angered Democrats in the US.

Mr Biden warned the Britain there would be no US-UK free trade agreement if the Brexit talks ended with the Good Friday agreement being undermined.

He tweeted: “We can’t allow the Good Friday agreement that brought peace to Northern Ireland to become a casualty of Brexit.

“Any trade deal between the US and UK must be contingent upon respect for the agreement and preventing the return of a hard border. Period.”

Expert on US politics, Professor Stephen Burman tells Express.co.uk that if Mr Johnson is deemed to have undermined the Good Friday agreement and Mr Biden is President, Washington could deal “retribution”.

Prof Burman said: “Joe Biden is Irish, so his commitment to a united Ireland would be absolute. If the Brits somehow contravened that and trouble arises on the border, Mr Biden would be furious.

“The UK would be finished in their eyes, and they would take retribution potentially across a whole range of policies.

Prof Burman warned that Washington could take action against the UK on trade and security in an effort to “teach us a lesson”.

He also warned that the UK could be left adrift if Prime Minister Johnson continues on his current path.

He added: “The first thing would be to trade. They’d have nothing to do with us on trade.

“The US doesn’t have a very high estimate of British capabilities in a military setting.

“What’s left is the UK would simply be ignored.

“No trade deal, the special relationship disintegrates infront of your eyes, a Biden presidency cultivates the EU while the UK is left adrift.”

Mr Biden said during the Brexit process that US interests in the UK are “diminished” because of the country’s decision to leave the bloc.