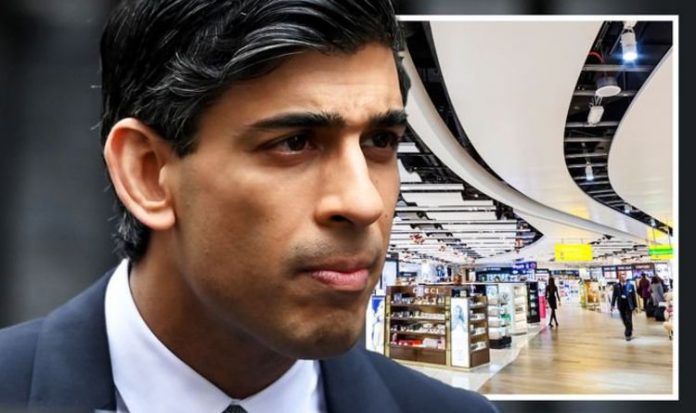 Changes usually take effect at 6pm on Budget Day itself – with the most recent adding around 22p to a pack of 20 cigarettes.

Duty on hand-rolling tobacco rose by a much higher six percent last year.

The Government has previously pledged to keep raising so-called “sin taxes” on cigarettes to put people off taking up the habit.

Last year’s statement reads: “The Government is committed to maintaining high tobacco duty rates as this is an established tool to reduce smoking prevalence and to ensure that tobacco duties continue to contribute to Government revenues.”

Thanks to Brexit, though, when travel restrictions come to an end, Britons will be able to enjoy duty-free cigarettes once again.

UK travellers have to be treated exactly the same as the rest of the world when in the EU – meaning they can buy and bring back cheap cigarettes and alcohol at duty-free stores.

Travel correspondent Simon Calder recalled in a recent column how this used to be “common practice” before the EU banned it in 1999.

He wrote: “Twenty autumns ago, the cross-Channel hovercraft levitated noisily off towards oblivion.

“In the final quarter of the 20th century, hovering between Kent and France was big business.

“Hoverlloyd built a vast international hoverport in 1969 at Pegwell Bay, close to Ramsgate, with a link to Calais.

“Its rival Seaspeed, part of British Rail, shuttled between Dover and Boulogne. For many years, the rail-hover-rail link was the fastest alternative to flying between London and Paris.

“A Channel crossing time of barely half-an-hour – three times faster than the ferry – was part of the appeal.

“But the real secret of the hovercraft’s success?

Mr Calder added in his piece for The Independent: “The hovercraft was kept aloft on a financial cushion funded by onboard sales of alcohol and tobacco. In the best example ever of wasteful travel, in the late Nineties, a newspaper promotion offered to pay motorists £1 if they agreed to hover to France and back – in the expectation that on-board sales would more than make up for it.”

The amount passengers can bring back with them from non-EU countries has also been significantly increased, and extended to EU countries, providing one of the most generous allowances anywhere in the world.

JUST IN: EU’s recovery fund ripped apart by French MEP: ‘Might not be legal’

It means passengers coming to Britain can now bring back three crates of beer, two cases of wine and one case of sparkling wine without paying UK duties.

UK excise duty is no longer due on alcohol and tobacco bought when leaving the country, so British travellers can save up to £2.23 on a bottle of wine, £2.86 on a bottle of Champagne or Prosecco, £2.28 on a six-pack of beer and £11.50 on a bottle of spirits.

The new rules also bring an end to VAT refunds for overseas visitors in British shops.

Foreign visitors will still be able to buy items VAT-free in-store and have them sent directly to their overseas addresses but the costly system of claiming VAT refunds on items they take home in their luggage will be ended.

François Bourienne, Chairman of the UK Travel Retail Forum said: “The UKTRF welcomes the conclusion of the Trade and Cooperation Agreement between the UK and the EU.

“The full effects and consequences of the deal will not be understood for some time yet but the text now offers travel retailers a degree of certainty regarding movement of goods and passengers for 2021.”

The return of duty free shopping between the UK and EU has been welcomed by the travel retail industry as it looks to recover from the devastating impact of the coronavirus pandemic.

Mr Bourienne said: “A full duty and VAT free system would be not only a tremendous support to all airports and ports looking to recover from the worst of 2020 but is also a Brexit-generated opportunity that the UK can seize immediately.”

Now the UK has left the EU the rules on personal allowances have changed to comply with the Brexit trade deal.

Mr Calder said: “For the past couple of decades basically the rule has been if you are coming back from the EU you can bring whatever you want.

“There were a few limits on cigarettes from Eastern Europe I think and also the Canary Islands, which are actually outside of the EU for customs purposes just like Gibraltar and the Channel Islands.

“But for the purposes of duty free it was to bring back what you like.

“Now with duty-free, you will be allowed to bring in 200 cigarettes duty-free, cheaper than you can get in Bulgaria etc.”

He continued: “You will also be able to bring in four litres of spirits or nine litres of sparkling wine which basically means a case of champagne.

“You will then be able to bring in two cases, so that is 24 bottles or 18 litres, of still wine which will be handy for people who like to stock up in France before they come back.

“And you are also allowed to bring in 42 litres of beer which is surprising but there we are.

“They are called some of the most generous limits in the world.”