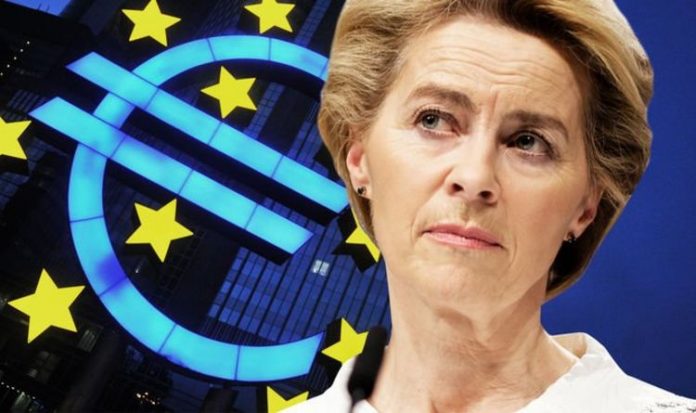 The UK’s decision to leave the EU will pose a number of dilemmas for member states, and the bloc as a whole, as the political landscape of Europe shifts. Brussels has had to adjust its budget as the UK’s £75billion (€86bn) in contributions is lost after Brexit. There will also be tense debate over the power dynamic in the EU, as some experts fear the UK’s departure will shift yet more power within the bloc to heavyweights such as Germany and France. There is also a worry among non-eurozone countries that they have lost a key ally in Britain, and that Brussels could attempt to lure them into adopting the shared currency.

Sebastian Plociennik, head of the EU programme at the Polish Institute of International Affairs, warned that these countries could be pushed towards eurozone membership.

He said in 2016: “The UK’s exit from the EU will change the relationship between eurozone countries and those without the common currency, to the detriment of the latter.

“They will be faced with a choice between fast-track adoption of the euro or political and economic marginalisation.”

Tony Barber wrote for the World Economic Forum in 2016 that EU member states were concerned about the balance of power in the bloc without the UK.

He said: “The non-euro nations are worried that, without the UK, the EU balance of power will swing strongly in favour of eurozone governments.

“That could make it more difficult for the interests of those outside the single currency to gain a proper hearing.

“To the extent that France, Germany, Italy and others pursue initiatives aimed at closer economic, financial and fiscal integration of the eurozone, the impression could arise that the non-euro countries are stuck in a sort of EU second tier or outer circle.”

Mr Sundstrom also said that Sweden will miss the UK given their close alignment on a number of issues.

He added: “Clearly Sweden is missing the UK more than most, because the UK and Sweden were very well aligned on a number of issues.