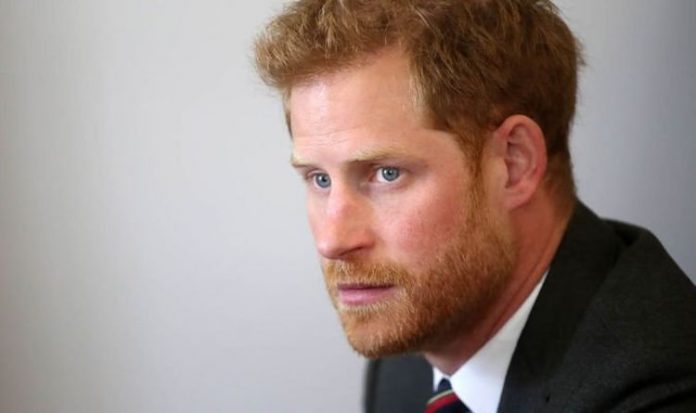 Prince Harry has been caught in “a tug of love” between his new family and his old one, royal commentator Camilla Tominey has claimed. The Duke of Sussex is facing a “dilemma”, the expert said, which sees him balancing “the ambitious former actress’s desire for both maximum publicity and unprecedented privacy while ensuring that already bitter relations with the royals do not sour even further.”

And, Ms Tominey added, Harry is to deal with this duality alone.

She wrote in the Telegraph: “Having always had an eye on the bigger prize of American adulation over British blandishments, Meghan appears to have little intention of returning to the UK.

“But for a blood-born British prince still seemingly desperate to keep up his royal and military ties, it is much more complicated.”

According to their exit terms agreed with the Queen, Meghan and Harry became financially independent, free to live abroad and to retain their patronages.

The couple also retained their full titles, but can no longer use their His/Her Royal Highness styles.

Moreover, they were barred from representing the Queen or the Crown by carrying our royal duties and tours.

Prince Harry news: Harry and Meghan will take part in an interview with Oprah (Image: GETTY)

And, most painfully for Prince Harry, the Duke was asked to relinquish his three honorary military titles.

The Queen decided to wait to fill these positions until the end of the 12-month review period – coming up next month – a move which has been perceived as the monarch leaving the door open to a possible return into the royal fold of her grandson.

Earlier this month, a friend of Harry claimed the Duke was determined to keep these three military patronages, which include the title of Captain-General of the Royal Marines.

However, insiders have indicated Buckingham Palace’s position hasn’t changed and, if the Duke is to be based abroad and pursue financial freedom, the Queen will need to reassign these titles to other full-time working royals.

Nevertheless, Prince Harry remains fully committed in his support to military personnel in service and retired, as shown through his work with the Invictus Games Foundation and HeadFit.

The 12-month review period was put in place to make sure the arrangement worked for both parties.

Now, following news Meghan and Harry are to take part in an interview with Oprah on March 7, the Queen is also set to ask them to relinquish all the patronages passed down through the Royal Family, it has been claimed.

Prince Harry news: Prince Harry was third-in-line to the throne when he was born (Image: EXPRESS)

Meghan would have to step down from her role with the National Theatre, a patronage passed on to her by the Queen after retaining it for 45 years.

Following their Megxit announcement in early 2020, Meghan and Prince Harry have also suffered a steady drop in popularity among UK adults, as shown by a rolling poll regularly updated by YouGov in which the fame and popularity of the top 15 members of the Royal Family are analysed.

Ms Tominey believes this popularity dip is likely harder to ignore for the Duke than for the Duchess.

Prince Harry news: Meghan and Harry could be asked to relinquish some of their patronages – report (Image: GETTY)

She said: “While Meghan may choose to ignore the couple’s plunging popularity ratings over here, it is much harder for Harry to turn his back on a Blighty which still, somewhat grudgingly, sees him as part of the Windsor establishment and remembers his undoubted contribution to British life with genuine fondness.”

The YouGov survey, updated earlier this year with data gathered between October and December 2020, shows Prince Harry is currently the eighth most popular royal with 41 percent of the 1541 people polled saying they have a positive opinion of him.

Meghan has dropped to the 11th position, with 32 percent out of the 1515 people interviewed saying they held a positive opinion of her.