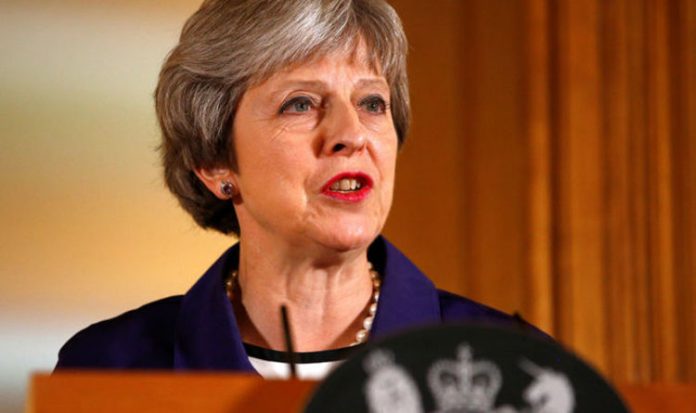 According to the Daily Telegraph, Tory Brexiteers now claim they have 48 fellow MPs who are willing to submit letters to the chairman of the backbench 1922 Committee, triggering a confidence vote of the parliamentary party.

MP Andrew Bridgen said he was submitting his own letter of no confidence in Mrs May to the committee.

The Prime Minister ordered her reshuffled Cabinet to attend a second meeting in Newcastle on July 23 as a way of uniting her ministers with Brexit talks due to enter yet another crucial phase.

A Number 10 source told The Times the meeting was a “regional Cabinet” and not intended to be a continuation of the Brexit plan talks outlined at Chequers last Friday.

After the resignations of Brexit Secretary David Davis  on Sunday and Foreign Secretary Boris Johnson on Monday, Mrs May met her reshuffled Cabinet on Tuesday morning where she hoped to reassert her authority ahead of a crunch few days for her leadership.

The Prime Minister ordered ministers to step up preparations for a ‘no deal’ Brexit in a warning to the EU that Britain’s patience is running out.

Her message was seen as a challenge to Brussels chiefs to respond positively to her new Brexit plan or she will walk out of talks without a departure deal, cancelling the UK’s expected £40 billion exit payment.

Theresa May attended a joint press conference with Angela Merkel later in the day at the Western Balkans Summit in London, where the German Chancellor said a white paper due tomorrow that sets out Mrs May’s Brexit plans in detail, marks “progress”.

The EU is yet to form a common response to the plan.

Mrs Merkel’s comments came as Environment Secretary Michael Gove and International Trade Secretary Liam Fox have given their backing to the Prime Minister, but hours later Conservative vice-chairmen Ben Bradley and Maria Caulfield resigned in a bitter blow to Mrs May.

They complained that it would wreck trading opportunities for Britain after exiting the bloc and result in Labour leader Jeremy Corbyn taking over as Prime Minister.

MP for Mansfield Mr Bradley, who voted Remain in the EU referendum in June 2016, said in his resignation letter: “I cannot with any sincerity defend this course to my electorate.”

Ms Caulfield, who backed Leave, complained that the backstop position in Northern Ireland “is not appropriate and should have been rejected” because “it has been used by the EU as a way of blocking a mutually beneficial deal”.

At the Western Balkans Summit, Polish Prime Minister Mateusz Morawiecki said Brexit negotiations were not easy but suggested Warsaw was satisfied with the progress that had been made.

But US President Donald Trump’s dig at the Prime Minister, as he left Washington for this trip to Europe, which includes a visit with Mrs May later this week, were not seen as helpful to the under pressure Mrs May.

Speaking on his itinerary, he said: “I have NATO, I have the UK which is somewhat in turmoil, and I have Putin.

“Frankly, Putin may be the easiest of them all. Who would think?”

He also stopped short of backing Mrs May to remain in power, adding: “That’s certainly up to the people, not up to me.”