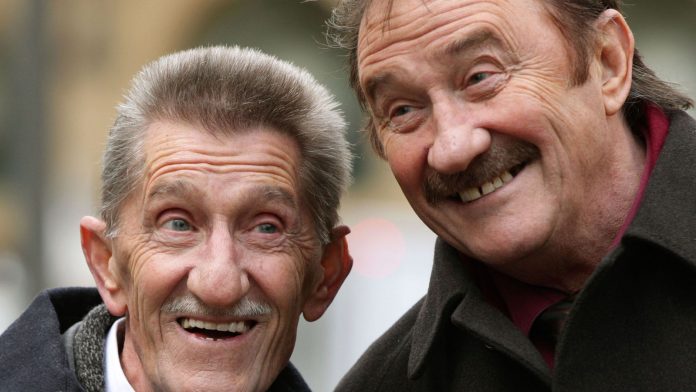 The government has been likened to “Reservoir Dogs remade by the Chuckle Brothers” as Labour went on the attack following this week’s dramatic cabinet resignations.

Shadow foreign secretary Emily Thornberry seized on Conservative divisions over Brexit and the walkouts of David Davis and Boris Johnson as she highlighted how “even Donald Trump can see they’re in turmoil and he hasn’t even got to Britain yet”.

The US president is due to arrive in the UK on Thursday, and it has emerged he will receive a guard of honour when he meets the Queen at Windsor Castle.

Ahead of Wednesday night’s World Cup semi-final, exchanges in the House of Commons were also dominated by thoughts of football, with Ms Thornberry suggesting the government should learn from the England side’s focus on teamwork and having a clear plan.

She used the day of England’s most important match for 28 years to highlight how “England’s progress so far in the World Cup shows what can be achieved when all the individual players work effectively as a team, when there’s a clear game plan and when they’re all working together and of course when everyone respects and listens to the manager”.

Filling in for Jeremy Corbyn at PMQs, she asked: “What lessons the England team could teach this shambles of a government?”

Ms Thornberry also made the Reservoir Dogs reference – a film in which the main protagonists all lie dying at the end.

Deputising for Theresa May, who missed PMQs as she attends a NATO summit in Brussels, Cabinet Office minister David Lidington also struck on the World Cup theme as he offered to buy Ms Thornberry an England flag prior to Wednesday night’s clash with Croatia.

Ms Thornberry was sacked from the Labour frontbench in 2014 after appearing to mock a family’s terrace home draped in England flags – leading to accusations she was a “snob”.

Mr Lidington also confirmed that the government white paper on Brexit proposals, which was agreed by ministers at a Chequers awayday last week and sparked the resignations, will be published on Thursday.

He then told Ms Thornberry: “Perhaps she will tell us what Labour’s alternative plan is – at the moment that’s one of the best-kept secrets in politics.”

Mr Lidington also offered assurances to Leave-supporting Tory backbenchers ahead of the publication of the government’s plan, amid anger from Brexiteers at the Chequers plan for close alignment with EU rules after the UK’s exit.

Hornchurch and Upminster MP Julia Lopez said: “Across our continent people are feeling dangerously ignored and if democracy is to mean what we all thought it did tomorrow’s white paper will show that we in Britain at least will not deny the instruction our people have given us.”

In response, Mr Lidington expressed his confidence the white paper on the post-Brexit EU-UK relationship will reveal “a vision for a future relationship which meets the vote that the people delivered”.

Despite the current infighting within Tory ranks – the worst since the EU referendum result in 2016 – Number 10 called for unity from Conservative MPs.

A Downing Street spokesperson said: “The prime minister urges all of the Conservative Party to get behind the plan agreed at Chequers.”