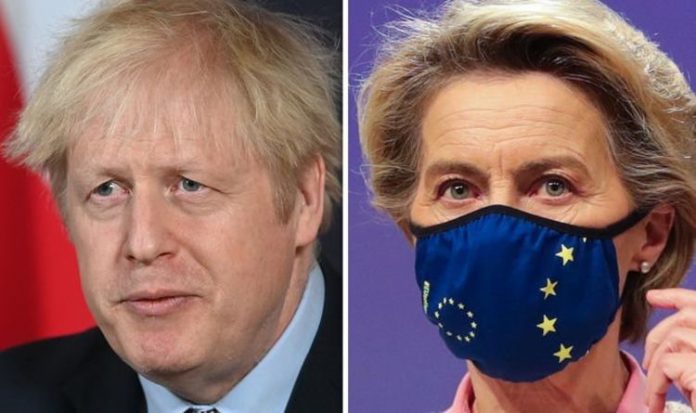 Britain and the EU have reached a post-Brexit trade deal after months of sometimes bitter negotiations. On Thursday afternoon, a statement from Downing Street announced “the deal is done” – swiftly followed by a confirmation from Brussels. Speaking shortly after the announcement, Prime Minister Boris Johnson said the agreement was a “good deal” for the “whole of Europe” – one that signified “a new stability and a new certainty in what has sometimes been a fractious and difficult relationship”.

He added: “We’ve taken back control of our laws and our destiny. From January 1, we are outside the customs union and outside the single market. British laws will be made solely by the British Parliament, interpreted by the UK judges sitting in UK courts and the jurisdiction of the European Court of Justice will come to an end.”

Mr Johnson also said the UK had achieved a “Canada-style” trade deal worth £660 billion and addressed the agreement on fisheries, a major issue during the negotiations, saying that the UK had taken back “full control” of its waters.

The deal is without a doubt a huge triumph for the Prime Minister, who in December last year, won a thumping majority at the general election with the promise “to get Brexit done”.

Beyond the headlines, though, the deal covers hundreds of smaller issues.

The devil of what has been agreed will be in the detail – and will be analysed in the days to come.

A big issue in negotiations – and one where both the EU and UK were keen to work together – was on security, and tackling cross border organised crime and terrorism.

And the deal is an ambitious one with clear rules on the sharing of fingerprints, DNA and other forensic data.

The EU said the deal “builds new operational capabilities, taking account of the fact that the UK, as a non-EU member outside of the Schengen area, will not have the same facilities as before”.

However, the bloc has set a major condition on this agreement: the UK must observe their commitments to the European Convention on Human Rights.

The ECHR is an international agreement drawn up by the Council of Europe, enforced by the Strasbourg-based European Court of Human Rights.

JUST IN: Macron’s plot to bring Britain back into ‘transformed’ EU

The Commission said: “The security cooperation can be suspended in case of violations by the UK of its commitment for continued adherence to the European Convention of Human Rights and its domestic enforcement.”

It comes after the Conservatives confirmed that they were launching a review of the Human Rights Act which gives the ECHR force in UK law.

Camino Mortera, a senior research fellow at the Centre for European Reform, wrote on Twitter: “As expected the ‘Trade and Cooperation Deal’ covers both trade and co-operation on matters such as law enforcement, civil and criminal judicial matters and research. It contains an additional ‘horizontal’ chapter on governance.

“The UK agreed to stay in the European Convention of Human Rights quite late during negotiations, but it was a breakthrough, as there can be no police and, especially, judicial cooperation without mutual trust on each other’s human rights standards.

“As such, the EU reserves the right to suspend the agreement if the UK drifts away from the ECHR.”

One said: “The EU can cancel the security, justice and police cooperation chapter of the trade deal if the UK leaves the ECHR. Not quite bring back control?”

Nigel Farage, the former UKIP and Brexit Party leader, though, said Mr Johnson has “done what he said he would do” in delivering Brexit.

He added: “On the big picture, I suspect on some of the detail, such as we’ll be back in charge of our fisheries, history may judge some of those aspects a little more harshly.

“But on the big stuff, the war is over. It has gone on for decades in this country…

“Now we’re out, arguably with a new treaty that’s closer to a partnership agreement. It’s not perfect, but goodness me it’s still progress.”