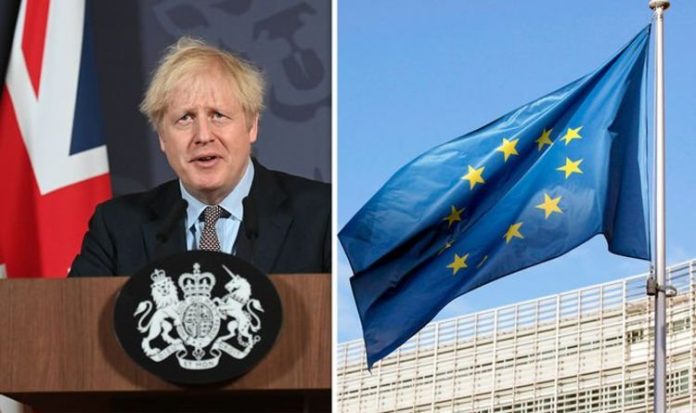 After months of negotiation, the UK and the European Union have finally agreed the terms of a trade agreement. The UK formally left the EU in January 2020, and a transition period with the EU will finally end on December 31. From 2021, the new rules of the “Canada style” agreement will come into force.

Announcing the agreement between the UK and EU at a press conference on Christmas Eve, Boris Johnson said the deal struck after months of negotiations will “protect jobs”.

He said: “A comprehensive Canada-style free trade deal between the UK and the EU, a deal that will protect jobs across this country.

“A deal that will allow UK goods and components to be sold without tariffs and without quotas in the EU market.

“A deal which will if anything should allow our companies and our exporters to do even more business with our European friends, and yet which achieves something that the people of this country instinctively knew was doable but which they were told was impossible.”

READ MORE: Brexit deal: What will happen to the Erasmus scheme?

What is a ‘Canada-style’ trade agreement?

After seven years of negotiations, Canada struck a deal with the EU known as the Comprehensive Economic and Trade Agreement (CETA).

Unlike a zero-tariff and zero-quota deal, CETA avoids most tariffs – but some still remain.

CETA came into place on a provisional basis last month, and it removes 99 percent of customs duties on exports from Europe and vice versa.

Tariffs remain on things like poultry, meat and eggs, and the CETA deal also increases quotas, but does not eliminate them altogether.

According to the Prime Minister, the new trade deal will also mean the UK is not subject to as many EU restrictions and regulations.

Mr Johnson said at the briefing on December 24: “We have taken back control of laws and our destiny.

“We have taken back control of every jot and tittle of our regulation in a way that is complete and unfettered.

“British laws will be made solely by the British Parliament, interpreted by UK judges sitting in UK courts.

“And the jurisdiction of the European Court of Justice will come to an end.”

Key points of deal with EU

From January 1, 2021, a number of changes will come into place as a result of the UK/EU trade deal.

The issue of fishing has remained key in negotiations over recent weeks, but Boris Johnson said the UK will be “an independent coastal state with full control of our waters” and would see its share of UK fish rising “substantially”.

EU fishing boats will still have access to UK waters until 2026, and a cut of 25 percent on fishing quotas will gradually be implemented.

With regards to tariffs, the deal will enable UK goods to be sold without tariffs or quotas in the EU market.

Mr Johnson stated the jurisdiction of the European Court of Justice will come to an end under the terms of the new trade deal.

The trade agreement allows for “continued and sustainable air, road, rail and maritime connectivity”, according to the European Commission, and there are provisions to ensure passenger rights and transport safety are not undermined.

With regards to security, Mr Johnson said he was confident the deal would protect police co-operation, the ability to catch criminals and to share intelligence across Europe.

A UK Government summary states the agreement will enable UK citizens to access healthcare when travelling in the EU, with reciprocal cover for EU member states which are responsible for the healthcare of an individual.

The Erasmus scheme, which allows students to study abroad as part of their degree, will end and be replaced with a UK initiative named after code breaker Alan Turing.