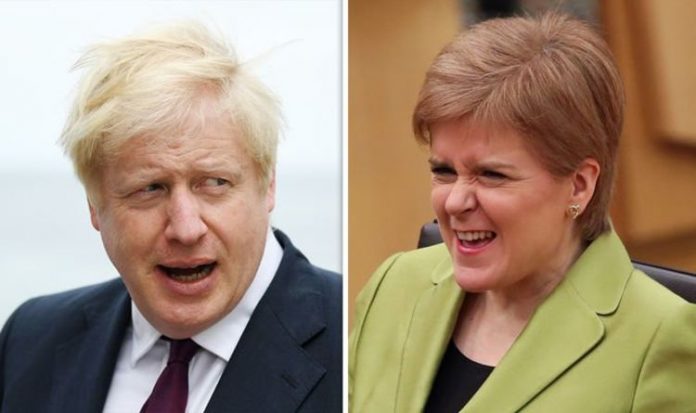 Despite Britain and the EU reaching a post-Brexit trade deal after months of fraught negotiations, Scottish First Minister Nicola Sturgeon is not too happy about it. On Thursday afternoon, Prime Minister Johnson said the UK had achieved a “Canada-style” trade deal worth £660 billion and addressed the agreement on fisheries, a major issue during the negotiations, saying that the UK had taken back “full control” of its waters. But according to Ms Sturgeon, the “major promises” made by the Government on fisheries had been broken.

She said: “The extent of these broken promises will become apparent to all very soon.

“People in Scotland voted overwhelmingly to remain in the EU, but their views have been ignored.

“This is a far harder Brexit than could have been imagined when the EU referendum took place, damaging and disrupting this nation’s economy and society at the worst possible time.”

The First Minister argued Scotland “has the right to choose its own future as an independent country and once more regain the benefits of EU membership”.

It seems, though, the Prime Minister did deliver his promise and his Christmas present on time.

When questioned at a Downing Street conference last week, Mr Johnson said: “As for a present for Nicola, well, there’s all sorts of things that will arise naturally from the UK getting a new relationship with our friends in the European Union.

“But one thing that may be of particular interest to the people of Scotland is that they will become the proud possessors of hundreds of thousands of tonnes of fish, shellfish, crustaceans.

“I don’t know whether Nicola’s a keen fish eater but she’ll have more than she could possibly consume herself for a very, very long time. So how about that, will that do?”

The First Minister was also asked at her daily coronavirus briefing what she would buy as a Christmas present for the Prime Minister, in response to his comments.

She said: “I’m probably not one to talk but a hairbrush, maybe.

“That’s meant as a lighthearted comment, not as a serious comment and I’m definitely not one to talk, as you can see.”

“We will wait and see whether there is one winging its way in the opposite direction.

“I’ll reveal that exclusively, perhaps, in one of the briefings over the Christmas period.”

In an exclusive interview with Express.co.uk, Alan Winters, director of the Trade Policy Observatory at the University of Sussex, claimed that despite Britain fighting tooth and tail to protect its waters, it could all soon go down the drain if Scotland becomes independent.

Ms Sturgeon is planning to hold a second independence referendum in the early part of the next Scottish parliamentary term, following elections to Holyrood in spring 2021.

If the Scottish National Party (SNP) wins a majority, senior figures believe it will give them the mandate to demand a referendum, regardless of what Mr Johnson thinks about it.

Should a second referendum happen and Scotland become independent, most of the waters the Prime Minister has tried to protect from the EU, could end up in the hands of Ms Sturgeon.

Scotland has approximately 60 percent of the seas and coastline of Great Britain.

Professor Waters said: “There is a great irony in the Westminster government fighting to defend fishing rights in waters that we are largely going to end up giving back to the Scots when they pursue independence.

“This is exactly what we have been doing.

“It is very gracious of us to take this fight on, because if we conceded them all and the Scots go independent, that will be their problem.

It is not exactly clear how UK waters will be divided after a second Scottish independence referendum.

Ahead of the first plebiscite in 2014, Holyrood published a report titled ‘Scotland’s Future and Scottish Fisheries’.

The report reads: “Following a vote for independence, the Scottish Government will enter into negotiations with the rest of the UK and with the EU institutions to fully define our fishing rights and other key issues.

“At present, Scotland’s fishing opportunities are provided for in a concordat among the UK nations, which gives Scotland a share of UK quotas.

“It will be in the interests of both Scotland and the rest of the UK to agree an appropriate and fair set of final allocations so that the normal fishing practices of each nation can continue unaffected.”