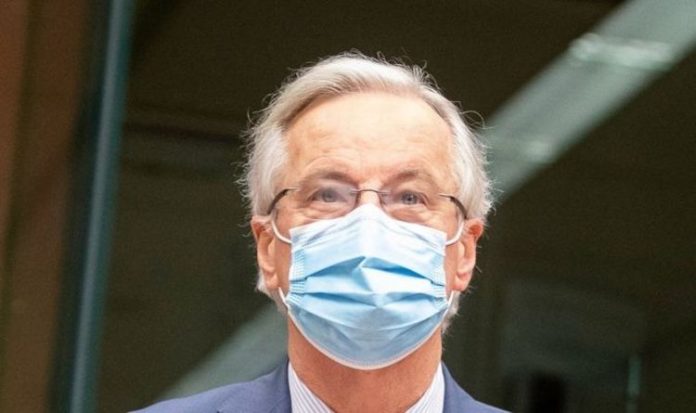 The level playing field has been one of the main areas of divergence between the two sides. In relation to state subsidies, worker’s rights and environmental standards, the UK has so far refused to sign up to any agreement which would entangle Britain into European regulations. In order to force the UK into agreeing on a level playing field, Mr Barnier is devising a framework for Brussels and London while not making it seem “the big bad EU is imposing its will on the UK”, ITV’s Peston stated.

At the bottom line, Mr Barnier wants to stop the UK from dropping standards in several sectors and instead, keep regulatory alignment with the EU.

Known as non-regression, this is relatively easy to impose in many areas such as environmental standards in comparison to requirements on state subsidies.

According to the ITV journalist, Mr Barnier is attempting to create a framework tying the two sides into fair competition rules.

He said: “Barnier is proposing a solution to that ‘UK problem’, such that the state obligations would be seen to bind both the UK and the EU.

“The big point is that Barnier seems to be trying hard to create a framework in which the obligations to engage in fair competition bind both the UK and the EU, and are not simply the big bad EU imposing its will on the UK.

“The baseline for both at the start of any free trade agreement would be the same, and subject to the same processes to prevent unfair competition in the future.”

As Mr Peston states, the UK adheres to multiple areas of the level-playing field while the EU will have “more clout” in setting standards for the two to abide by post-Brexit.

Due to the EU’s apparent weight in setting standards, negotiators have now removed their demands over the role of the European Court of Justice.

Before talks were suspended last week, it was thought the UK had been ready to agree to non-regression pacts on the level playing field in pursuit of a deal.

The two sides have also failed to agree a compromise on dispute mechanisms.

If the UK does pursue a different state aid system, EU officials want serious implications to be attached.

The two sides have also failed to agree on the issue of fisheries with the EU keen to maintain its current access to Britain’s waters.

Now the UK is a coastal state, the Government wants to set out its own governance for how Britain’s waters are managed.

The EU had offered the UK a 10-year transition window on fisheries and a return of 18 percent of fish caught in UK waters.

Speaking to The Daily Telegraph, one Brexiteer said a return of 50 percent may be enough to secure a trade deal.

They said: “The position is that the UK domestic fleet hasn’t got the capacity to fish all our waters now as a result of the Commons Fisheries Policy.

“The fishermen are entirely happy that there should be a glide path into full control.”