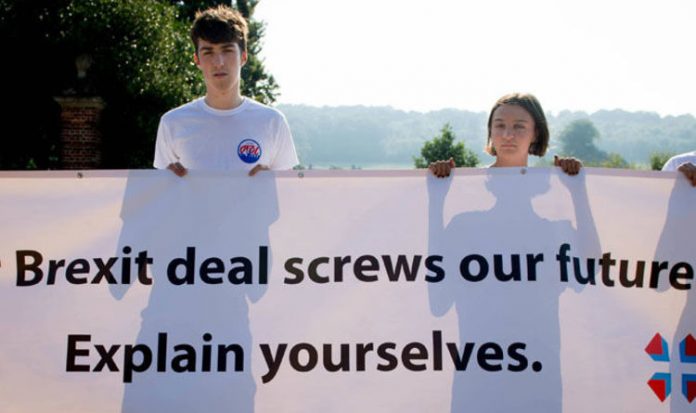 Ministers arriving at Chequers in Buckinghamshire in their Government Jaguars with tinted windows, were greeted by a banner saying “Your Brexit deal screws our future, explain yourselves.”

The slogan was unfurled by campaigners from the Brexit-blocking group Our Future, Our Choice, outside the main entrance to the centuries old country estate which has been home to Prime Ministers since the 1920s.

The group is calling for a people’s vote on the final terms of the trade deal which ministers are frantically trying to put together in what were expected to be heated discussions this weekend.

OFOC co-founder Femi Oluwole, aged 28 years, said: “We’re here today because we sent every Cabinet member an email requesting that they come and speak to us and explain what they are doing with Brexit.

“They sent 16 rejections and the rest just ignored us so we thought we would come and speak to them.

“We came with a banner that says ‘Your Brexit deal screws our future’ to explain themselves because I think the entire country wants to know what’s going on.

“I think it’s important to protest today because they are labouring under the delusion that what they are doing is in the interest of the people which it’s not so we have to make that very clear to them.

“The only way this gets solved is if people vote on the deal.

“Brexit means straining our trade relations with our closest and biggest trading partners. It means cutting off the ability for people to live in countries across Europe. It means weakening the ability to control the laws of our economic environment and it weakens our influence on the international stage.

“I think it is just bad for the British people.

“It’s a massive distraction from the real problems in this country which need to be fixed because the Government will simply not be addressing them if all they are doing is focussing on Brexit.

“Brexit takes away our options, that is wrong.

“I want them to come to the conclusion that leaves us in a situation where people get to vote on the deal.

“If that doesn’t happen, Brexit needs to stop.”