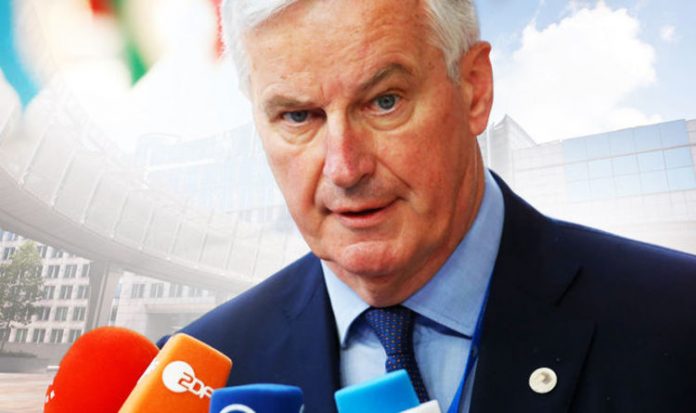 The European Commission’s chief Brexit negotiator left the door open for an EU compromise but only if the Prime Minister is willing to soften her own red lines, as he reaffirmed the European Council’s recent divorce conclusion.

Mrs May is trying to convince her Cabinet to adopt a so-called “third way” as she puts together a white paper outlining an offer for the UK’s post-Brexit relation with the EU.

Leaked details of the Prime Minister’s plan, seen by Express.co.uk, show her willing to commit aligning the UK to EU regulations for goods in order to ease trade between the two parties.

Speaking in Brussels, Mr Barnier insisted “there are still too many questions and too few answers” as he tried to push negotiations forward.

He said: “We must find solutions that respect the integrity of the single market. We are ready, I am ready to adapt our offer should the UK’s red lines change.

“Our objective has always been to find a solution that works for us and the UK, not against the UK.”

The Frenchman was less willing to comment on the details being discussing inside Chequers summit in Buckinghamshire.

Mr Barnier added: “I cannot go into details on the negotiations, it wouldn’t be helpful.”

European Council officials have urged Brussels figures to proceed with caution when commenting on the British meeting and before the publication of the white paper.

Member states don’t want to see any British plans publicly rejected before they are officially tabled by Westminster.

With the Irish backstop still Brexit’s most contentious subject, Mr Barnier urged both sides to “de-dramatise” the border and work towards their joint promise to maintain the status quo on Ireland.

He said: “Let me be clear, we are not asking for any new borders between Northern Ireland and the rest of the United Kingdom.

“All or parts of the backstop can be replaced, which addresses the specific issue of a land border – we must de-dramatise this backstop.

“We will need to clarify how and where controls are done, but ultimately it’s only technical controls on goods, no more, no less.”