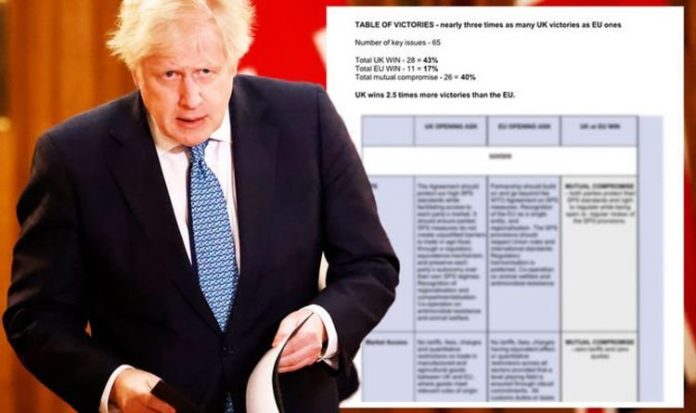 The UK and the EU are closing in on a post-Brexit trade deal after months of fraught negotiations. A deal is expected to be finally announced today, after negotiators continued talks throughout the night as they encountered a number of last minute hold ups. People briefed on the talks said that the ongoing work included fine-tuning the details of agreements struck on Wednesday on EU fishing rights in UK waters.

However, for the first time since February last year, officials on both sides said the terms of the future relationship were essentially settled.

The deal will preserve tariff-free EU-UK trade for goods. It will also cover issues such as police and security co-operation, and preserve the cross-border energy market, but it will do little for the services sector.

Nevertheless, it will be a huge triumph for Mr Johnson.

According to a leaked Government document, the UK has won 2.5 times more victories than the EU.

The paper, drafted as part of the Government’s attempt to sell the deal to eurosceptic MPs, claims David Frost’s negotiators got their way on 43 percent of the major issues, compared with 17 percent for the EU’s Michel Barnier, with 40 percent of the treaty being a balanced compromise.

The crucial issue of fishing has been described as a mutual compromise, with the Government settling for a five-and-a-half-year transition “during which access is fixed”.

However, a Downing Street insider has claimed: “Even before the end of the transition period we will take back control of 130,000 tonnes a year, enough to stretch to the South Pole and back. After that we can fish and eat every damn fish in our waters.”

Despite the doubts over some of the “victories”, the document illustrates the scope and value of the trade deal to the Government and areas where Lord Frost’s team did achieve their negotiating goals.

One of the biggest sticking points in the talks was the EU insistence that the bloc should be able to apply tariffs if the two sides diverged in terms of environmental, social and labour standards in the future.

JUST IN: UK leaders ‘accepted replacement of sterling’ with EURO

While the landing zone was a mutual compromise, it does bear a closer resemblance to the UK objective than that of Brussels, the Guardian noted.

The Government had merely wanted a reflection point in the future where the two sides could discuss upgrading the basic minimum below which neither could go.

The Government document states: “The UK rejected the EU’s asks for an ‘equivalence’ mechanism, and instead secured a review and rebalancing clause which allows either side to initiate a formal review of the economic parts of the deal, including the level playing field provisions, and update the balance of the agreement over time.

“Any short-term rebalancing measures are strictly limited and proportionate and subject to the approval of an independent arbitration panel.”

DON’T MISS:
UK leaders ‘accepted replacement of sterling’ with EURO [INSIGHT]
Guy Verhofstadt accused of being ‘self-proclaimed Brexit policeman’ [REVEALED]
Sturgeon to get ‘taste of her own medicine’ with Shetland Islands [EXCLUSIVE]

He said in a research note: “The EU appears to have secured a deal which allows it to retain nearly all of the advantages it derives from its trading relationship with the UK, while giving it the ability to use regulatory structures to cherry pick among the sectors where the UK had previously enjoyed advantages in the trading relationship.”

Nigel Farage, the former UKIP and Brexit Party leader, said Mr Johnson has “done what he said he would do” in delivering Brexit.

He added: “On the big picture, I suspect on some of the detail, such as we’ll be back in charge of our fisheries, history may judge some of those aspects a little more harshly.

“But on the big stuff, the war is over. It has gone on for decades in this country…

“Now we’re out, arguably with a new treaty that’s closer to a partnership agreement. It’s not perfect, but goodness me it’s still progress.”