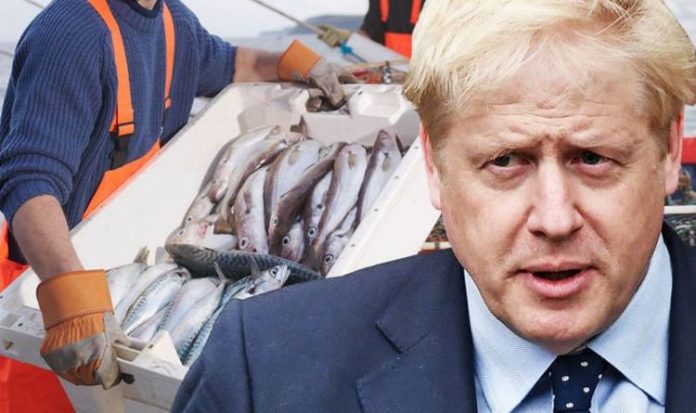 Prime Minister Johnson is poised to announce his trade deal with the EU today as arduous negotiations look to have finally reached a conclusion. The Prime Minister will speak to European Commission President Ursula von der Leyen by phone to sign off a deal before holding a press conference in Downing Street to notify the public. For months, disagreements surrounding a level playing field, state aid and fisheries have frustrated negotiators and held up a deal.

Despite the fishing industry representing just 0.1 percent of the UK economy, it has become a symbolic issue given Brexiteers’ calls for more sovereignty outside of the EU.

The Scottish Fishermen’s Federation (SFF) released a statement this week branding the deal “derisory” for fishermen in the UK, signalling the Prime Minister could be headed for a fisheries backlash.

SFF chief executive Elspeth Macdonald said: “If any of these offers are accurate, then in terms of percentages and length of the transition period, they are utterly derisory and totally unacceptable to the Scottish fishing fleet.

“Repatriating only 35 percent of the EU’s landings to the UK phased in over a period of several years would be a terrible deal for the fishing industry.

“You cannot have sovereign control over your fishing waters with one hand tied behind your back.

Joe Barnes, the Daily Express’ Brussels correspondent, reported that Mr Johnson accepted that the EU hands back 25 percent of the value of fish it catches in British waters over a five-and-a-half-year transition period.

The UK had initially demanded that the EU hand back 35 percent according to reports, signalling a concession late on.

Barry Deas of the National Federation of Fishermen’s Organisations had already warned Mr Johnson that he would “receive a kicking” if he folded in talks with the EU.

State aid rules have been in place since the Treaty of Rome was signed in 1957.

It stops member states from giving companies or industries help that would distort competition, although there are exemptions to the rules.

Governments cannot hand out subsidies, tax rebates or take stakes in companies “unless it is justified by reasons of general economic development”.

The EU feared that the UK would increase its state aid in order to gain an unfair economic advantage after Brexit, and therefore called on London to abide by Brussels’ laws.

As the UK and EU prepare to announce a deal, the compromises on the key issues will be laid out for politicians in Brussels and Westminster to scrutinise before the deadline on January 1.