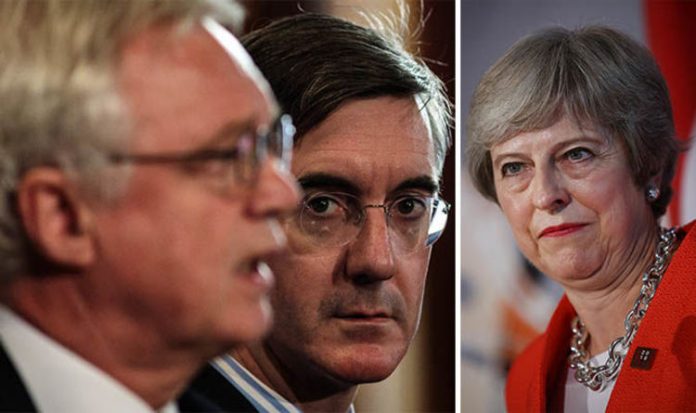 The IEA, a non-profit, free-market think tank, issued the report titled ‘Plan A+: Creating a Prosperous Post-Brexit UK’, claiming it could deliver the “Brexit Prize.”

The plan has already won the backing of leading Brexiteers, including David Davis, Boris Johnson and Jacob Rees-Mogg.

Mr Rees-Mogg dubbed it the “most exciting contribution” to the Brexit debate in months, as the plan sets off a Canada-style free trade deal as an alternative to Theresa May’s contentious Chequers proposal.

But Mr Rees-Mogg said it went even further than the Canada deal struck in 2016, calling it “Canada plus; Super Canada; or Supercalifragilisticexpialidocious Canada.”

What is a Canada-style deal?

Officially known as the EU-Canada Comprehensive Economic and Trade Agreement (CETA), the agreement was signed in October 2016, after seven years of negotiation and ratification.

After seven years, all tariffs on industrial products are due to disappear completely.

A large bulk of tariffs on agricultural products will also be removed.

Canada is not obliged under CETA to pay into the EU budget, sign up to such as free movement, or abide by European Court of Justice (ECJ) rulings.

However, the deal has been criticised for its lack of comprehension, as hundreds of exceptions are listed under the trade deal, and CETA does not guarantee Canadian firms any EU financial security.

This means it still poses a challenge for Canada to trade freely in Europe.

What did the IEA proposal say?

As Mr Rees-Mogg indicated, the IEA proposal aims to build on the Canada deal and improve it.

Here are the key points:

Shanker Singham, the author of the IEA plan, told BBC Radio 4’s Today programme: “Our approach is: well, what is that prize?

“I think that prize is entirely to be found in your independent trade and regulatory policy. It is nowhere else.

“If you don’t have an independent trade and regulatory policy as you leave the EU, then this is only a damage limitation exercise. It can only be a bad result.”