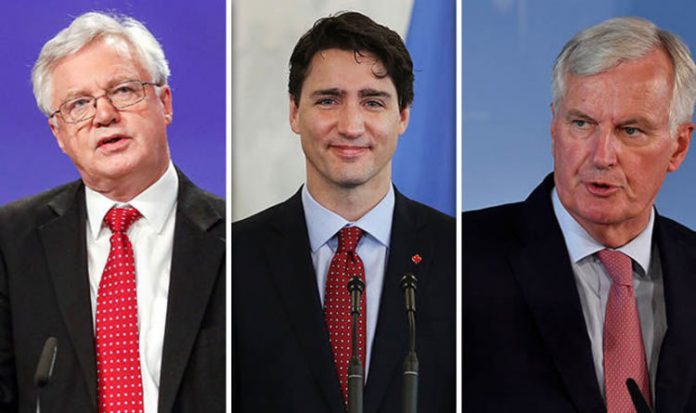 The EU’s chief Brexit negotiator, Michel Barnier, has told MPs on the Brexit Select Committee that the plan proposed by Mrs May is “not acceptable” during a private meeting in Brussels on Monday.

A number of MPs at the meeting confirmed that Mr Barnier had raised concerns about the key elements of the deal, suggesting a Canada-style agreement instead.

But current Brexit Secretary Dominic Raab insists the Government would not “roll over” at the first signs of criticism from Brussels.

What is a Canada-style Brexit deal?

Officially known as the EU-Canada Comprehensive Economic and Trade Agreement (CETA), the agreement was signed in October 2016, after seven years of negotiation and ratification.

After seven years, all tariffs on industrial products are due to disappear completely.

A large bulk of tariffs on agricultural products will also be removed.

Canada is not obliged under CETA to pay into the EU budget, sign up to such as free movement, or abide by European Court of Justice (ECJ) rulings.

However, the deal has been criticised for its lack of comprehension.

Hundreds of exceptions are listed under the trade deal, and CETA does not guarantee Canadian firms any EU financial security.

This means it still poses a challenge for Canada to trade freely in Europe.

But some Brexiteers, including former Foreign Secretary Boris Johnson, have argued the model is attractive to the UK due to the lack of obligations in return for EU market access.

Adopting this model would respect campaign promises on the leave side, including ending large sums of money being sent to Brussels and greater control of immigration.

The Prime Minister has tried to rule a Canada-style agreement out in the past, telling EU leaders in Florence last year: “We can do so much better than this.”

However the fallout from Mrs May’s disastrous Chequers agreement continues.

After Monday’s meeting with Mr Barnier, Pat McFadden, the Labour MP member for Wolverhampton South East, said: “It was not a bit of questioning or pushback, it was an emphatic and clear rejection of the facilitated customs arrangement and common rulebook.”

Brexit select committee chair, Hilary Benn, claimed that there had been an “emphatic rejection” of the Chequers deal by the European commission.

Mr Raab has insisted the government would instead take a “resolute, tenacious” approach to the final stage of the negotiations and that Barnier was a man “we can work with”.

He added: “We explain our arguments so they’re completely understood, we try and resolve any concerns they’ve got and we try to pursue those negotiations in a spirit of pragmatism.

“If that’s matched on the other side, and I’m confident it will be, we’ll get a deal.”