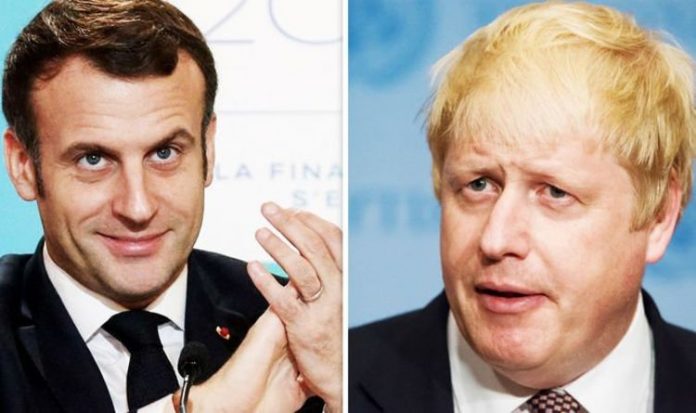 European Commission President Ursula von der Leyen told EU leaders that a “narrow path” has opened up for the UK and EU to strike a post-Brexit trade deal. This morning, Ms von der Leyen said the “next few days are going to be decisive”. Officials from both sides are continuing discussions in Brussels, after talks were extended past a provisional deadline set for last Sunday.

Downing Street is pushing for a “zonal” approach in fisheries discussions, which would allow EU countries only a certain amount of fish from British waters every year.

However, French President Emmanuel Macron was last week accused of souring talks at the eleventh hour, with fresh demands over the EU’s access to British fishing waters.

Mr Macron has vowed to protect French fishermen, who are expected to lose a significant part of their quota from January 1 as part of any trade deal.

However, Prime Minister Boris Johnson has also promised to take back control of UK waters after Brexit, and any concessions on the matter are likely to cost him dearly.

Brexiteers have long hailed the “sea of opportunity” that awaits them — but it has now emerged that vessels patrolling UK waters after December 31 may have to rely on data from a French firm.

In October 2019, a Department for Environment, Food and Rural Affairs (DEFRA) tender handed the contract to track UK and foreign-licensed boats in British waters to French firm Collecte Localisation Satellites (CLS) after previously being held by a UK firm, Globavista.

Andrew Bridgen, the MP for North West Leicestershire, told The Times last year: “It is ludicrous at a time when we’re supposed to be taking back control of our fisheries that we’re handing over the policing of them to a company part-owned by the French government.

JUST IN: France ‘bending EU as Macron’s veto more powerful than any other’

“I warned the fisheries minister George Eustice several months ago of the political danger of such a move.

“I can’t believe anyone with any political nous would make a decision such as this.”

It is not the only fiasco carried out by Downing Street regarding the policing of UK waters.

A memo written by DEFRA officials in August 2019, accidentally sent to the BBC, said there was “a lot of uncertainty” over whether Britain had the resources to police its seas.

The document raised concerns that only 12 vessels were available “to monitor a space three times the size of the surface area of the UK”.

At the time of its publication, Mr Johnson was negotiating a new withdrawal agreement with the bloc.

The Prime Minister was willing to leave with no deal if necessary to get Brexit over the line by October 31.

The lobby group Fishing for Leave described the Government warning as “defeatist”.

They said: “DEFRA’s strange document that has been accidentally sent to the press can only be met with incredulous dismay.

“If this is looked at objectively it’s difficult to see how Britain couldn’t make a semi-decent fist of protecting our waters.

“It’s high risk for EU vessels to fish far into UK waters where they’d really have their trousers round their ankles.

“Does DEFRA not rate our proud Royal Navy or is DEFRA/Whitehall looking for excuses to be soft to not upset the EU? On past form one wouldn’t be surprised.”

Only two months later, Mr Johnson released details about the steps he intended to take to ensure UK waters are controlled and policed under a no deal scenario.

In October 2019, the Government published a 159-page “No Deal Readiness” report, prepared by Cabinet Office Minister Michael Gove, which set out tariffs and extra administration costs for importing and exporting goods, the impact on travelling to the EU on holiday and changes to rules like data protection.

In the proposals, Downing Street announced that the Government had strengthened and greatly increased its ability to control and enforce UK waters.

The report reads: “Specifically compared to 2018/2019 in England, the Government has: Increased the amount of surface surveillance (i.e. ships at sea) seven fold.

The National Federation of Fishermen’s Organisations welcomed the measures.