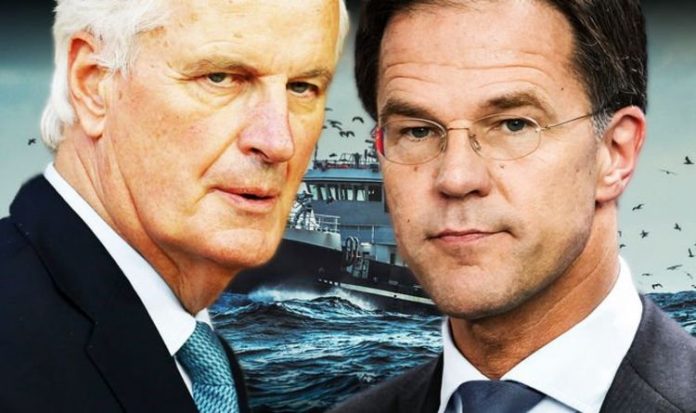 The EU and UK’s hopes of a deal were boosted after Prime Minister Boris Johnson ceded ground on regulatory divergence. The talks had been deadlocked for months over the issue, as Brussels looks to ensure fair competition post-Brexit. However, EU negotiator Michel Barnier warned that differences still remain over fisheries – an issue that has long threatened a no deal exit. A no deal Brexit could cause disruption for fishermen on both sides of the English Channel, but Dutch fishermen have previously expressed concern over the long term impacts of the UK’s departure.

Dutch skipper Cor Vonk said in 2019 that “many will go bankrupt” in the Netherlands if access to UK waters is ended.

“We’re talking about 500 to 600 families left in the drink. Many fishermen will go bankrupt, and perhaps us too.”

European fishermen also fear clashes with one another if a no deal Brexit happens.

If UK waters are closed, Belgian, Dutch and French fishermen will have to share a fraction of the waters.

“That’s a domino effect, which is really disastrous.”

When ITV spoke to Dutch fishermen earlier this year, they echoed these fears.

Guido Betsema, a fisherman at the Dutch port of Den Helder said: “In a year we spend 80 percent of our time in English waters.

READ MORE: Brexit fishing: French refuse to back down: ‘UK will lose more’

Manfred Weber, a German MEP and leader of the European People’s Party in the European Parliament, revealed his fears that the two sides are on an increasingly dangerous path.

He said: “The world is full of enemies of the European way of life, our freedoms and our values. We should fight these enemies together instead of each other.”