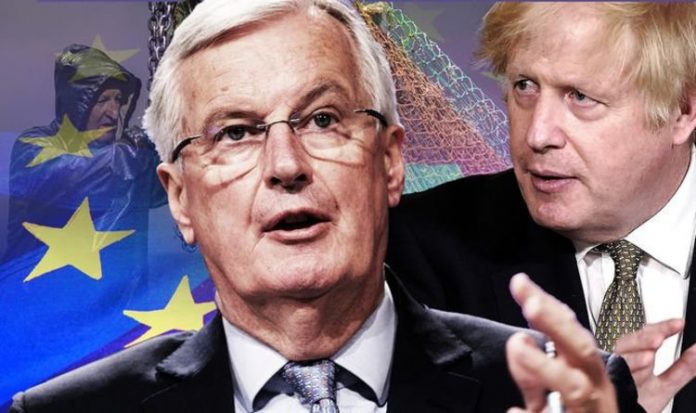 The UK’s rich fishing waters have remained one of the main areas of divergence so far during Brexit talks. Mr Johnson has promised to take back control of the UK’s waters but speaking to Express.co.uk, former Conservative MEP and academic research director at the Institute of Economic Affairs, Syed Kamall revealed the one major concession to the EU he may need to make in order to reclaim British waters.

He said: “The UK fleet may not be able to land 100 percent of fish in the UK Exclusive Economic Zone so the UK would probably have to offer permits to non-UK fishing fleets while cooperating with the EU and countries such as Norway, Iceland, Faroe Islands to manage stocks.

“Some analysts have suggested that walking away could raise the value of UK fish landings by 50-60 percent and would outweigh the impact of EU tariffs on UK fish exports to the EU.”

While within the EU, the UK was part of the Common Fisheries Policy (CFP) which allowed states to share access to waters within the exclusive economic zone.

Due to the UK’s large coastal area, this has allowed some EU fleets to exploit British waters.

The UK’s chief negotiator, David Frost has insisted Britain must have a deal similar to that of Norway whereby fish quotas and access are agreed on a yearly basis.

If the UK were to agree a similar deal, Britain would then be able to determine which fishing vessels are allowed into the Exclusive Economic Zone.

According to EU statistics, the north east Atlantic – which includes UK waters-  accounts for 75.5 percent of landed fish in 2018.

JUST IN: US trade deal on brink: Trump ‘abandons’ hopes of Brexit deal

Next week, Mr Barnier will meet with his counterpart for emergency talks in order to try and salvage Brexit negotiations.

Following the last round of negotiations earlier this month, Mr Barnier warned the UK was now wasting time.

He also warned neither side has made progress on the state of fisheries or state aid.

Like the sovereignty of fisheries, state aid has remained a key area of divergence and represents the level of Government support for companies.

Mr Barnier has insisted the two sides must have a level playing field on the matter or it could make the UK a more desirable destination for organisations.

The negotiator said after the latest talks: “Too often this week it felt as if we were going backwards more than forwards.

“Given the short time left, what I said in London in July remains true.

“Today at this stage, an agreement between the UK and the European Union seems unlikely.

“I simply do not understand why we are wasting valuable time.”