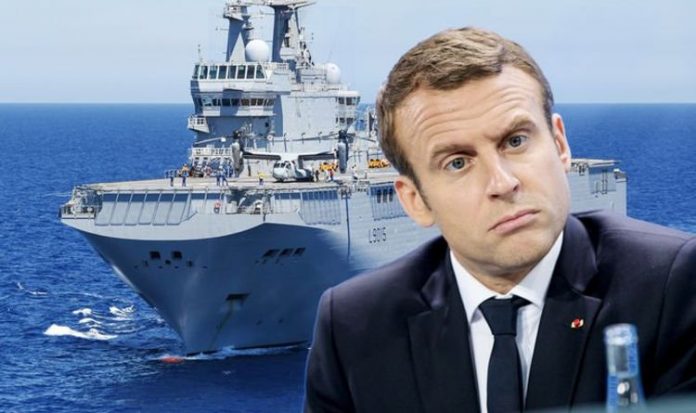 The UK has lowered its demands for a greater share of the catch in UK waters after Brexit, Michel Barnier said on Wednesday. As he briefed ambassadors and members of the European Parliament, the bloc’s chief Brexit negotiator claimed the UK had signalled that it could accept 60 percent of the value of stocks from British seas from January 1, down from the 80 percent London had originally called for. Mr Barnier had offered to return up to 18 percent of the value of stocks, which was rejected.

Negotiators are tackling the complicated issue of the more than 100 shared fish stocks as the talks enter what diplomats have called “a make or break phase”.

Fishing nations such as France, Denmark, the Netherlands, Belgium and Spain fear Mr Barnier may cave too easily to British demands as talks enter their endgame.

As many wonder whether a no deal Brexit is really on the way, a 2018 report sheds light on how France might respond if there is no agreement on fishing.

Two years ago, Paris warned its navy could intervene to avert a fresh “scallop war” between British and French fishermen.

At the time, violent clashes had erupted when the British accused the French of ramming their vessels, firing flares and hurling stones in a highly dangerous and illegal attack.

Disgruntled French fishermen, whose UK rivals can dredge for scallops year round while they are barred from doing so during summer months, said they came under a violent counter-attack.

Stephane Travert, the former French Agriculture and Fishing Minister, said at the time: “We can’t keep going on like this, we can’t keep having skirmishes like that.

“The French Navy is ready to step in if more clashes break out, as well as carrying out checks.”

His comments came as French fishermen vowed to attack British boats if they returned to the disputed Baie de Seine before a deal between the two sides was struck.

“If these are not satisfactory, we’ll launch another assault.”

Franck Tousch, skipper of the Sachal’éo, added that he had “the fright of my life” when his boat was struck and damaged by a UK vessel during a recent clash.

He said: “In 33 years on the job, I’ve never seen anything like it.

“It’s a real shame to go this far. But if we have to go back out there to defend ourselves, I”ll go on another boat with my colleagues.”

French fishermen said they would have been happy for the British to come back but only if they approved a “gentlemen’s agreement” for no vessels to return until October 1, as in previous years.

Known as coquilles Saint Jacques in France, scallops are one of a few species whose catch is governed by national rather than EU regulations.

France bans all scallop dredging between May 15 and October 1 to allow them to reproduce, but Britain allows its vessels to operate year-round.

While UK boats are not allowed to enter French territorial waters up to 12 nautical miles off the coast, they can legally operate in the vast Baie de Seine that stretches from Cherbourg to Dunkirk.

Mr Travert conceded that there was nothing “illegal” about what the British were doing but that Brexit had no doubt exacerbated tensions.

He told CNews: “English fishermen are mainly pro-Brexit and it has to be said that the tensions flared up again just as the UK’s departure (from the EU) approaches.”

Mr Travert said he backed Mr Barnier in seeking a comprehensive fishing deal, including scallops, between the UK and the EU’s 27 member states.

He added: “We are looking for something global, and don’t want fishing to be treated separately, because fishing cannot be a variable of Brexit.”

Talks between the UK and France to end the dispute over scallop fishing failed to conclude due British and French intransigence.

Speaking in the House of Commons, Conservative MP Philip Hollobone said: “If this fishing is taking place outside of French territorial waters why can’t the Royal Navy accompany our ships back into those fishing grounds?

“If we’ve got fishery protection vessels and type 23 frigates permanently positioned in the Channel, surely the Royal Navy should be at sea with our fishermen to protect their livelihoods?”

Former Environment Minister George Eustice responded by saying it was the responsibility of the French authorities to police and enforce fishing activity in the area.

He told MPs that he had written to his French counterpart to express his “disappointment” at an agreement not being reached.

He told the Commons: “The UK Government has offered to assist French enforcement authorities with MMO (Marine Management Organisation) personnel should they want to consider joint operations given the risk of further altercations.

“I have also asked the French government to consider the alternative options available to them.

“Firstly, it seems to me that putting back in place the agreement for the over 15-metre fleet, which has stood the test of time over the last five years, would be preferable to no agreement at all and I hope the French industry will reconsider their position in this regard.

“Secondly, it is open to the French government to lift the domestic restrictions they have in place earlier than they normally would in order to address concerns that their industry has expressed about the lack of a level playing field.

“The UK industry is legally allowed to fish in the Bay of Seine. They have shown considerable restraint during the negotiations and I welcome their cooperation and understanding.”

Mr Eustice said he had emphasised the “absolute need for safety to remain paramount” and he hoped a “mutually beneficial outcome might still be agreed”.

Former Shadow Environment Secretary Sue Hayman said livelihoods of communities were “being hurt” by not being allowed to fish in the area.

She said the French navy should have stopped the “appalling violence” and sought assurances over the measures in place to stop it happening again.

Ms Hayman added: “As we await the publication of the Fisheries Bill, the industry is looking to the Government for some backbone and for the minister to fight for them, their livelihoods and their communities.”