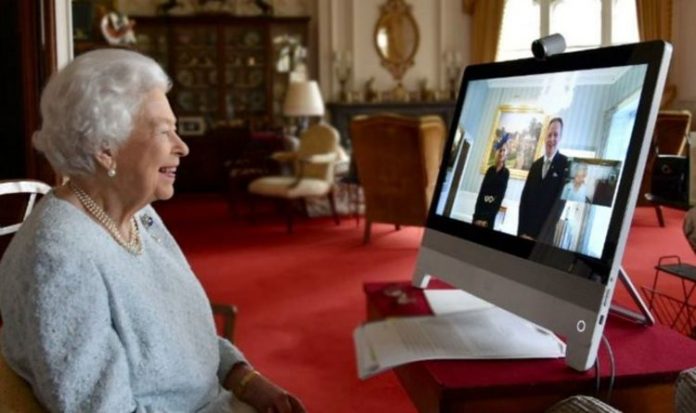 The Queen has kept busy during the coronavirus pandemic by carrying out a number of virtual engagements and calls. In a recent social media post, the monarch has shown exactly what her work from her set up looks like.

The Royal Family’s official Twitter account has shared a photo of the Queen hosting a virtual audience with Dr Ferenc Kumin, Ambassador from Hungary, and his wife Mrs Kumin.

The photo shows the Queen side-on, revealing her computer, webcam and background setting.

The Queen, who wears a pale blue wool dress with her statement pearls, beams into the webcam as she talks to the ambassador.

The monarch is sat on a chair with a flatscreen computer placed on a table in front of her, at a slight angle.

Underneath the monitor a sheet of A4 paper is visible, with a bulk of text in a large font.

Her glasses are also carefully placed on the table in front of her.

The Queen hosts the video call in a large room in Windsor Caslte, with multiple items visible in the background, including a number of arm chairs and cabinets.

The carpet of the room is a striking bright red.

The Queen has spent much of the last eight months at her Berkshire residence, having moved their ahead of the March national lockdown with her husband Prince Philip.

She spent some of the summer months in her Scottish residence at Balmoral Castle, before spending a brief time at Sandringham, Norfolk.

The couple then returned to Windsor Castle ahead of England’s second national lockdown.

Earlier this week Buckingham Palace announced the Queen will spend the festive period with her husband Prince Philip at Windsor Castle.

A Palace spokesman said: “Having considered all the appropriate advice, The Queen and The Duke of Edinburgh have decided that this year they will spend Christmas quietly in Windsor.”

The Royal Family hope their decision to spend the day apart will inspire others to celebrate the festive period carefully, even though the rules have been relaxed so households can mix.