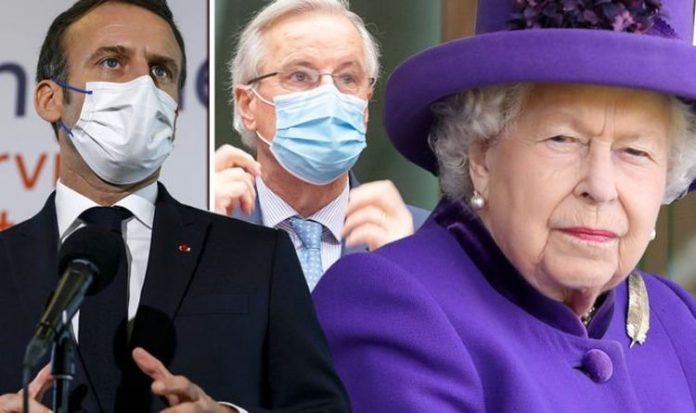 Prime Minister Boris Johnson will today fly to Brussels for talks with European Commission President Ursula von der Leyen in a bid to salvage any chance of a deal. The deadline for an agreement to be met is fast-approaching and no deal is fast becoming a genuine possibility. Major disagreements centre on fishing rights, business competition rules and how a deal will be policed.

A deal looked set to be on track after moves by the UK’s negotiator David Frost and the EU’s Michel Barnier suggested a step in the right direction late last month.

This was scuppered, however, after France declared it would veto any agreement it did not agree with, the EU later demanding ten years of unfettered access to the UK’s waters as the price of a deal.

This was widely regarded as being on France’s word, as the country benefits from a disproportionately large share of fishing grounds, around a quarter of its total catch coming from Britain’s rich waters.

Since the Leave camp won the historic vote in 2016, France in particular has taken aim at Britain for its decision to reclaim powers from Brussels.

Boris Johnson: The clock is ticking for the PM to secure an agreement (Image: GETTY)

French journalist Christopher Nunès, in a tweet that was later deleted, at the time said: “I’ve always had a low opinion of the English.

“A nation that can’t behead its Queen is not to be trusted!”

Further, the front-cover of left-wing newspaper Libération carried an image of Mr Johnson on a zipwire during the 2012 London Olympics, with the headline: “Good luck.”

The paper’s European correspondent, in a column, made a sly jab at English and Welsh people, thanking them “from the bottom of my heart” for voting to leave the EU.

JUST IN: Brexit talks on precipice of collapse – Ireland admits no deal likely

In a sneering piece, he wrote: “Thank you for your sacrifice!”

He called the result “a vote of incredible courage, which has politically devastated and will economically weaken your country – the rest of Europe can only be thankful”.

He went as far as to blame the UK for having prevented the EU from being able to reform, and thanked Britain for having “taken the risk to divide your society, for a long time to come”.

Even high-profile French politicians and those close to the Brexit deal talks have broken protocol and mocked the UK.

Remainers: Despite Brexit being a dead-certain fact, Remainers continue to protest the historic vote (Image: GETTY)

He said: “All we are asking of the UK is to honour its commitments in the political declaration.”

He added that an agreement was still possible, “despite the short time available, which is the choice of your Government”.

Brexit timeline: If the UK and EU fail to reach a deal the two will trade on WTO terms (Image: Express Newspapers)

It now appears that leaders within the EU are becoming frustrated with France’s increased demands.

Following the fishing access demands, German Chancellor Angela Merkel called for “compromise” on both sides to get a deal over the line.

The UK Government has said that the meeting between Mr Johnson and Ms von der Leyen may smooth things out for officials to resume talks.

Yet, reports have suggested that an agreement may never be possible.

Speaking at Prime Minister’s Questions, Mr Johnson said, “a good deal is still there to be done,” but stressed that the EU’s position was to have an “automatic right to punish us” if the UK’s rules and regulations didn’t move in step with the EU in the future.

And while Mrs Merkel said a Brexit deal was still possible, she insisted that the integrity of the bloc’s single market must be respected.

Mr Johnson and his cabinet have started to move to the EU’s tune.

The Prime Minister yesterday withdrew elements of the Internal Market Bill that undermined the withdrawal agreement, signed into EU and UK law in January 2020.

He also offered a three-year transition period for European fishing fleets to allow them to prepare for post-Brexit changes.