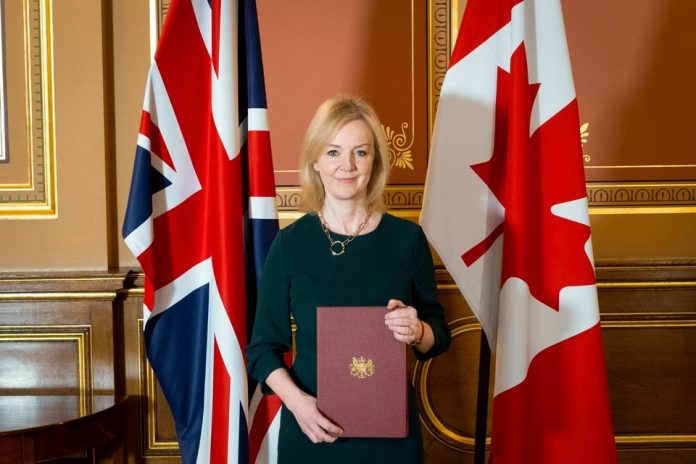 The signing comes after both countries last month announced an ‘agreement in principle’ to roll over current trading arrangements and begin negotiations on a new, bespoke UK-Canada trade deal in 2021.

Today’s agreement gives certainty for UK businesses exporting goods and services to Canada worth £11.4 billion. The trade deal supports British industries including automotive manufacturing and food and drink, which between them provide jobs for more than half a million people across the UK.

Overall, an estimated £42 million tariff burden on UK exports has been saved. The benefits locked in under the agreement signed today include:

This is a brilliant deal for Global Britain. It secures £20bn worth of trade with a friend and ally that shares our commitment to free enterprise, democracy and free trade. It provides certainty for car and food and drink exporters in particular, and paves the way for a more advanced deal that goes further and faster in modern areas like digital and data, women’s economic empowerment and the environment.

The deal also takes us a step closer to joining the Trans-Pacific Partnership, a high standards agreement of 11 dynamic Pacific nations. Membership would deepen market access for our businesses, help turn us into a global hub for tech and services trade, and strengthen the global consensus for rules-based free trade.

All nations and regions will benefit from preferential access to Canadian markets. For example, together the West Midlands and North West regions exported over £1.2 billion worth of goods to Canada last year, while Scotland and Northern Ireland collectively exported £1 billion.

In under two years, the UK government has agreed trade deals with 55 countries accounting for £170 billion of UK bilateral trade.