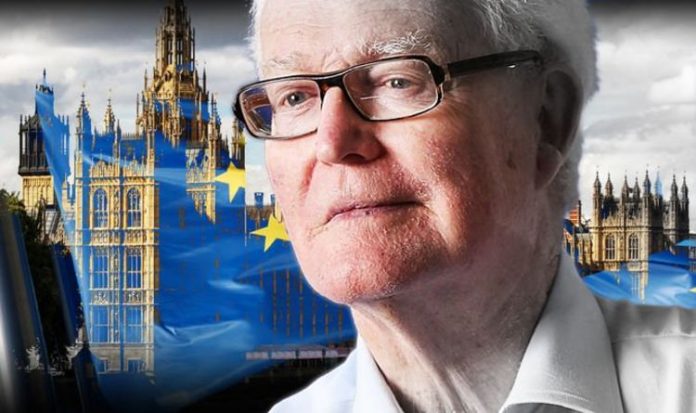 At 11pm on January 31, Britain left the EU, putting an end to almost half-a-century of eurosceptic frustrations. The journey there was not an easy one, though, as Brexit day was preceded by a debilitating political period that bitterly divided the nation. Since the Leave vote won in June 2016, unprecedented levels of parliamentary rancour, public anger and mistrust has dominated political debate.

Many parliamentarians and politicians on each side of the political spectrum tried to ignore the democratic will of the people, and attempted to scupper Brexit.

As the country starts its new chapter outside the European bloc, in an exclusive interview with Express.co.uk, Ukip founder Alan Sked recalled how the Government of the day turned Britons into “EU citizens” with the Maastricht Treaty in the late Nineties.

As soon as he became Prime Minister in 1991, Sir John Major wanted to place “Britain at the heart of Europe” with the Maastricht Treaty.

The Treaty is the international agreement that saw what was then the European Economic Community (EEC) evolve into the EU with initially only 12 member states.

It also granted EU citizenship to every person who was a citizen of a member state.

The Treaty, which greatly increased the powers of the European Commission, was widely unpopular and, according to Professor Sked, was also meant to be kept secret from the public.

The emeritus Professor of International History at the London School of Economics (LSE) said: “When it was in the process of being approved in Brussels, Denmark had to have a referendum on it under its constitution.

“However, the Danes didn’t want to have a referendum without reading it first, so they published the Treaty in Danish. I was invited to go to Copenhagen to make speeches against Maastricht, which I did.

“At the time, I was the leader of the Anti-Federalist league.

“We got a copy of the Danish version and we brought it back to London and translated it into English.”

Professor Sked continued: “We then gave it to day Times and day Times published it as a supplement one weekend, so everyone got a copy.”

According to the prominent eurosceptic, that was the first time it was published in English.

Prof Sked added: “The Treaty was negotiated in the House of Commons in the meantime by MPs who had never read it.

“And they passed it.”

He also revealed that Sir John’s Foreign Secretary Douglas Hurd was asked by other MPs what the implications of becoming EU citizens were.

The Ukip founder said: “He was asked for example, if it meant that Britons could have been called to serve in European army.

“And he was the one who signed up the Tories to Jean Monnet’s Action Committee for the United States of Europe in the late Sixties.”

Mr Monnet was one of the founding fathers of the EU.

In 1955, he founded the Action Committee for the United States of Europe in order to revive European construction following the failure of the European Defence Community (EDC).

It brought political parties and European trade unions together to become a driving force behind the initiatives, which laid the foundation for the bloc as it eventually emerged.

According to Professor Sked, Mr Hurd signed up the Tories through Lord Edwin Plowden’s private account in the City.

He added: “The original cost was £15,000 for the first year, which was quite a lot of money in the late Sixties.”