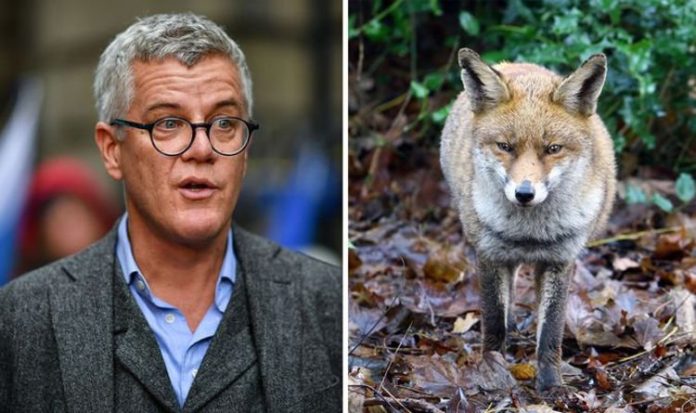 Barrister Jolyon Maugham sparked Twitter outrage and an RSPCA investigation on Boxing Day last year, as he told his 180,000 followers: “Already this morning I have killed a fox with a baseball bat. “How’s your Boxing Day going?” He then added, trying to explain his actions: “[Killing the fox] wasn’t a great deal of fun.

“It got caught up in the protective netting around the chickens and I wasn’t sure what else to do.

His actions were immediately condemned as barbaric by animal rights advocates.

The 49-year-old QC tried to justify the incident by saying the RSPCA would have done the same.

However, a spokesman for the animal charity said its officers were “looking into” the incident.

After visiting the lawyer, they reportedly removed the remains of the fox.

Under the Animal Welfare Act, causing unnecessary suffering to an animal can lead to a prison sentence or a fine of up to £20,000.

However, three months later, the RSPCA announced that after conducting the investigation, which involved independent experts, a veterinary pathologist and a forensic vet, Mr Maugham would not be prosecuted.

Its prosecutions department concluded the evidential threshold needed to bring a prosecution was not met as the findings suggested the fox was killed swiftly.

The RSPCA said: “When making prosecution decisions, we must be fair and objective and make them on the facts of each case.

“It is important to understand that it is not necessarily illegal to kill a fox, but if unnecessary suffering is caused, a criminal offence may have been committed.”

JUST IN: EU chaos: Macron could go against bloc’s rules to appease rival

Mr Maugham welcomed the decision, saying in a statement: “I know that some were genuinely upset by my actions on Boxing Day and the tone of my tweets.

“I am profoundly sorry for that upset. It was my intention to convey in a gently deprecating manner the incongruity of my Boxing Day morning. I got that wrong.”

It is not the first time Mr Maugham has been at the centre of controversy in the last couple of years.

The Central London-based high profile lawyer was behind a number of legal challenges against Brexit.

In 2018, he claimed there was no “proper mandate to leave the EU” and the Vote Leave campaign should have faced fines and even criminal charges.

Following accusations the Vote Leave campaign overspent in the referendum, the Electoral Commission investigated and concluded there was no wrongdoing.

However, the Good Law Project, set up by Mr Maugham two years ago, sued and the Electoral Commission was forced to reopen its investigation.

Writing in the Guardian, Mr Maugham said: “The immediate consequences of that finding are legal. There should be fines for Vote Leave, and there could well be criminal charges to follow.

“But an even bigger question is what this means for the referendum result, and the future of our democracy.”

The Remainer said Parliament decided to drop a series of legal rules that normally apply to safeguard votes from cheating.

He continued: “The sad consequence is that – although a judge may yet join the Electoral Commission in deciding Vote Leave broke the law – there is unlikely to be any way in which a court might declare the outcome void.

“Parliament instead left to MPs the job of choosing what to do with the referendum, which Government ministers made clear was ‘advisory’.

“And in normal times, where they acted rationally and on the basis of evidence, this would be enough: it is beyond sensible doubt that there is no proper mandate to leave the EU.”

More recently, the anti-Brexit campaigner also claimed Prime Minister Boris Johnson had a mandate from a “tiny number of people” to get Brexit done.

During an interview on BBC Radio 4’s Today Programme in October, 2019, Mr Maugham called for a Brexit extension, saying: “Parliament is our supreme constitutional actor and the Prime Minister, who has a mandate from a tiny number of people, has to abide by what Parliament wills.”

Twitter users reacted to the comments, with one posting: “And Jolyon has a mandate from how many people?”

Another said: “Never mind the rest of us, eh?

A third commented: “Yes the Government should abide by its commitments, especially to 17.4 million people.”

Since the Conservative Party’s triumph in this month’s general election, though, Mr Maugham appears to have come to terms with the fact that Britain is leaving the EU.