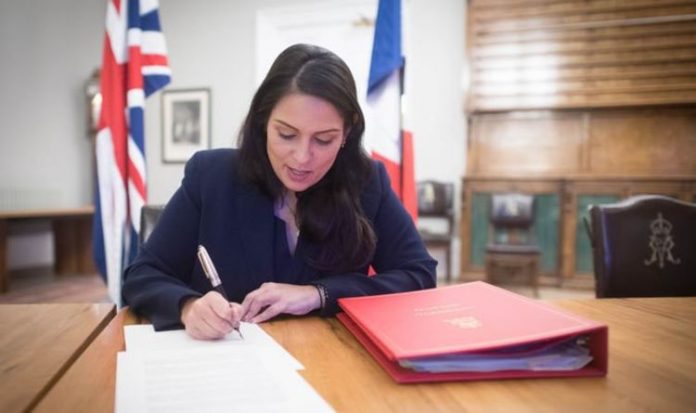 The Home Secretary said the Brexit deal will lead to firmer and fair border controls for the UK. Extradition arrangements will be streamlined under the new agreement. It also includes provisions for swift exchanges of national DNA, fingerprint and vehicle registration information and continues air passenger name sharing.

Ms Patel said: “The safety and security of UK citizens is the Government’s top priority and the UK will continue to be one of the safest countries in the world.

“I’m immensely proud of the comprehensive package of capabilities we’ve agreed with the EU.

“It means both sides have effective tools to tackle serious crime and terrorism, protecting the public and bringing criminals to justice.

“But we will also seize this historic opportunity to make the UK safer and more secure through firmer and fairer border controls.”

The end of transition arrangements on December 31 means new border controls will come into force across the UK.

Fee movement will end and migrants will be awarded for English language skills, secure jobs offers and how much they earn.

Tougher border rules for EU criminals will also come into force. Foreign criminals sentenced to more than a year in jail will be banned from entering the UK.

And the UK will make it harder for criminals to operate and smuggle illicit commodities such as guns and drugs into the country.

From July 2021, the UK will start receiving advance data on all goods coming from the EU into Great Britain, something which has not previously been possible under EU rules.

The UK will stop “insecure” national identity cards being used instead of passports at borders from October 2021.

But Britain will lose access to the EU’s Schengen Information System II (SIS II) database of alerts about people and items such as stolen firearms and vehicles.

The EU has said it is legally impossible to offer SIS access to the UK.

A National Police Chiefs’ Council spokesman said:  “We welcome the agreement between the UK Government and European partners.

“We are working with Government to fully understand the detail of the security agreement and how it will be implemented, and ensure we are prepared for any changes to the way we currently operate.”