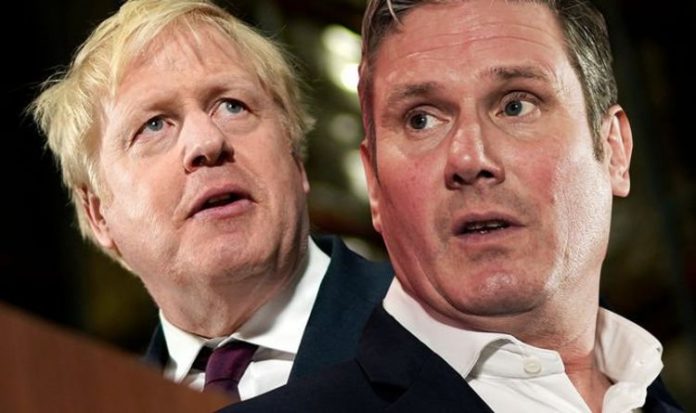 Only a few months ago, Sir Keir Starmer was making headlines as Shadow Brexit Secretary for his role moving the Labour leadership in favour of a second referendum. However, since taking over the party, Sir Keir has gone rather quiet on the matter. On the day the Government openly admitted it was going to break international law by overwriting parts of last year’s withdrawal agreement, the Labour leader did not launch any political attacks on the Prime Minister.

This is despite the civil service’s top lawyer Jonathan James quitting in protest over the decision.

Sir Keir, a lawyer himself, focussed his Brexit intervention on the message that the issue had been settled and the divide between Leave and Remain was over.

He told Sky News: “We have left the EU, and therefore the arguments about Leave and Remain that tore us apart for years are over.

“I’m very clear therefore what’s now in the national interest is getting a deal.

“We need to get a deal and we need to move on.”

It can be argued that the reason why Sir Keir is so determined not to talk about Brexit is because he knows it was the very reason Labour suffered its worst defeat since 1935 at the last general election.

However, the Labour leader will ultimately have to step into the debate, particularly if international law is broken and Britain leaves the EU without a deal in place.

But if he does so, he will have to be extremely careful on how to play his card.

He said: “He did great damage to the Labour stance by forcing the London view to be the majority view.

“That is not the majority view in the Labour Party and he has got to be very careful about that.”

Lord Owen added: “There is a significant grouping, which is content with the decision to come out of the EU.

“He has got to build a reputation now and it is wise if he is not going to get too highly involved in Europe.

“As a leader of the Labour Party, he needs to talk about other issues.”

Gisela Stuart, who served as a health minister during Tony Blair’s first term as Prime Minister, also told Express.co.uk: “What he has done since being elected, is very good.

“For example, he immediately took a strong stance against antisemitism.

“The way he shaped his Shadow Cabinet was also right in a sense.

“He brought in new MPs and kept some of the wisest people such as the chief whip in the Commons and the Lords.

“But his real big challenge will be about Labour values. What do we really stand for?

“This includes what the future relationship with the EU should be.”

The Vote Leave chair added: “By the look of it, none of the people in his Shadow Cabinet are Brexiteers.

“And only people like Lisa Nandy appreciate what we have to do in the North.

“It has been a good start but now he has to show that he understands why Labour lost so badly last year.

“He has to reflect that in his policies. Otherwise we become like the Democrats in America.

“Labour becomes a party of cities and people in the public service.

“It has to be more than that.”