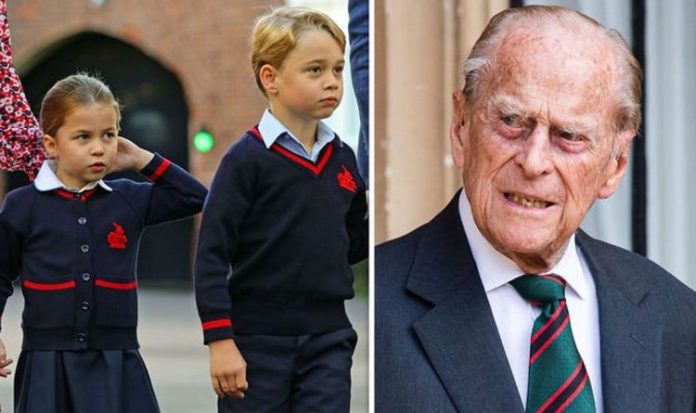 Prince Philip, 99, and Queen Elizabeth II, 94, have remained in good health during the coronavirus pandemic. The royal couple have isolated with a select group of palace staff who have been referred to as ‘HMS Bubble.’ Next week the Duke of Edinburgh will return to Wood Farm in Sandringham with the Queen, and while they will be close to the Cambridges’ Anmer Hall home, they may avoid seeing their great-grandchildren as an added health precaution.

Prince George, seven, and Princess Charlotte, five, returned to Thomas’s Battersea for the start of the autumn term this week.

The young royals will be grateful to be mixing with their peers again for the first time in months.

Kate, Duchess of Cambridge and Prince William spent lockdown with George, Charlotte and their youngest Prince Louis, two, in Norfolk and are understood to have recently returned to the capital.

Prince William expressed his relief at sending George and Charlotte back to school during a royal visit to Northern Ireland on Wednesday.

The Duke of Cambridge was in Belfast to mark Emergency Services Day and told a police officer: “I think every parent is breathing a sigh of relief that school has started again.”

He added: “Five months – it’s been wonderful, but it’s been a long five months.”

During term time the Cambridges are usually based in their apartment at Kensington Palace which is a short distance from George and Charlotte’s school.

However, at the weekends and during the school holidays the family are known to travel to Norfolk where the children adore having the run of Anmer Hall’s extensive gardens.

Asked about how the new ‘Rule of 6′ might affect grandparents who help provide childcare Mr Hancock said it was’ a very significant problem in terms of the spread of the disease’.

While Prince Philip is understood to be in good health and has carried out a handful of royal engagements in recent months, the Duke’s age means he will have to be especially cautious.

This being the case it seems unlikely Philip will risk meeting Prince George and Charlotte until the upsurge in COVID-19 is curbed.

Earlier this week a Buckingham Palace spokesman confirmed the Queen would be making Windsor Castle her main administrative base moving forward.

A statement about the Queen and Philip’s scheduled move to Wood Farm said: “The Queen and the Duke of Edinburgh will depart Balmoral Castle during the week commencing September 14 to spend time privately on the Sandringham Estate.

“These plans will be kept under review and will, of course, be subject to all relevant guidance and advice.”

Buckingham Palace in London has traditionally been the Queen’s official home but the permanent shift to Windsor Castle was made due to the pandemic.