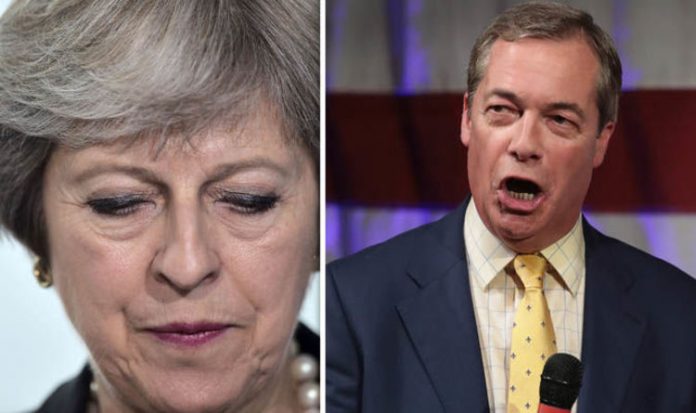 The leading Brexiteer blasted the Prime Minister for the way she has handled the Brexit negotiations so far.

Mr Farage argued British citizens have seen their wish of leaving the EU in a clean and clear way snubbed twice – a move set to cost dearly the establishment.

He told BrexitCentral: “If, as it now looks, the trust the people put in the democratic process, both in the referendum and in the general election when both parties promised us it would be a a relatively clean break from the EU, is betrayed, then prepare for the backlash.

“And it may be unlike anything we have seen in the UK for a very long time.”

Mr Farage, who with his eurosceptic party Ukip played a vital role during the Brexit referendum campaign, went on attacking directly Mrs May.

Arguing her choice as a Prime Minister was “quite extraordinary” in the first place as she was a Remainer, he said: “Two years on, she still can’t say she believes in Brexit.”

He then went on in his attack, calling her “dishonest” and “deceitful”. Speaking about the next move Brexiteers who feel betrayed by their government should take, he said: “They should have one last push, getting rid of a dishonest, deceitful Prime Minister and try to have a proper leader who believes in Brexit.

“This is the only hope we have for now of having a democratic Brexit.”

But, he continued, Ukip may be the country’s “only hope” to see the UK successfully leaving the bloc.

He added: “When it comes to Brexit, Ukip is the real deal, anything else is a pale imitation.”

And he argued he may have “no choice” but to come back as a leader of his former party if the government kept working towards a Brexit “in name only”.

He said: “The very last thing I want to do is to return a leader of the Ukip, I can’t imagine anything more hateful.

“But having spent all this year enforcing the establishment to give us a referendum and having played a relatively important role in the campaign itself in terms of motivating particularly non voters to go and vote I can’t just stand idly.

“If we carry on this trajectory I will have no choice.”