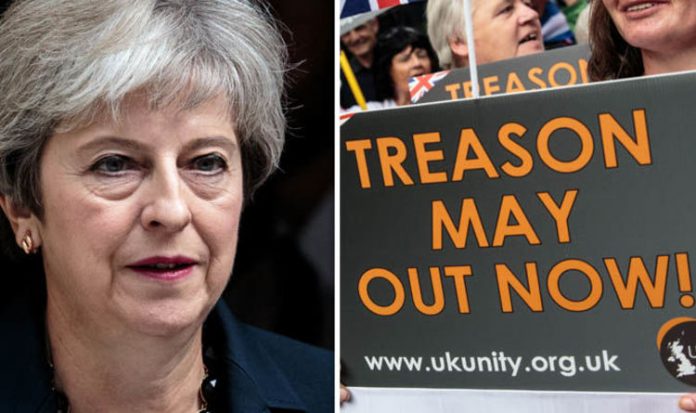 The Prime Minister is pushing her Chequers plan with a UK-wide tour targeting Tory members and local chiefs who are unhappy with her soft Brexit proposal.

Mrs May is to dispatch her Cabinet across Britain to speak directly to unhappy Conservative supporters and local leaders.

Mrs May’s Chief of Staff Gavin Barwell has ordered ministers to “sell Chequers” with a script to take directly to sceptical local party’s influencing voices, according to The Sun.

The Prime Minister would be scrambling to gather enough public support to avoid a major backlash at the party’s conference next month.

But Mrs May’s attempt to save the Chequers could be coming too late, as Brexiteers are in turmoil.

Matthew Elliott, founder of Vote Leave, has called people backing Brexit to gather for a show of strength.

He told the New Statesman: “It’s really time for people on the Leave side, who want to make sure that the final deal is close to Theresa May’s Lancaster House speech, to speak up and make their opinions heard and to get back on the pitch.”

Mr Elliot, who supports a hard Brexit scenario, fears winning the referendum could not automatically lead to a successful Brexit.

He said: “We won a crucial battle but we could lose the overall war.”

The hardcore Brexiteer partially blamed this turn of events on the pro-Brexit campaigners themselves.

Arguing that the appointment of David Davis as Brexit Secretary inspired a false sense of security in the heart of many, he said: “You can understand why groups like Change Britain scaled down their operations but I still think it was a mistake.

“I’m disappointed that the Leave side left the battlefield after the referendum.”

But Mrs May could face an insurgency as soon as this weekend, with 60 Conservative MPs ready to launch plans to take down her Chequers deal, according to an anonymous source.

The source told the Daily Telegraph that the rebels, led by arch-Brexiteer Jacob Rees-Mogg, have prepared a series of reports setting out how a “clean” Brexit would present solutions to the Northern Ireland border dilemma and a free trade deal.

The source told the newspaper the papers will be released over four days starting from Sunday.

They also said Mr Rees-Mogg’s argument is expected to be backed by Mr Davis and former Foreign Secretary Boris Johnson.

Earlier today rumours the government is preparing for a no-deal Brexit scenario have become louder after a secret Treasury document outlining emergency plans was captured on camera.

The document warns Government departments will have to make cuts to prepare for a no-deal Brexit saying: “Their first call should be internal reprioritisation.”