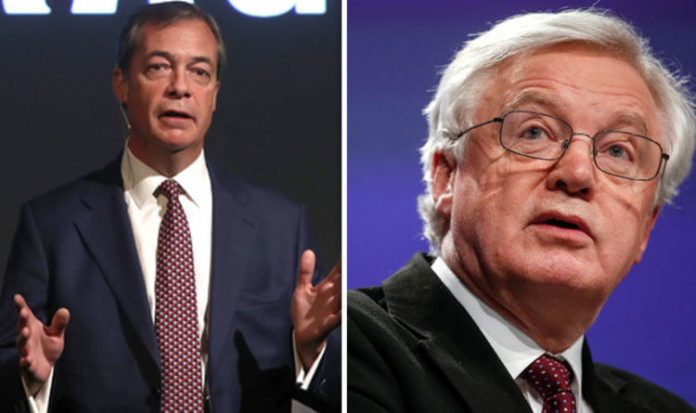 The former Brexit secretary and former Ukip leader will appear with veteran Labour MP Kate Hoey at the Leave Means Leave rally at the University of Bolton Stadium to demand that the historic vote to get out of the EU is fully respected.

The three will demand that Theresa May chucks her Chequers plan which critics believe will turn Britain into an “EU colony”.

Instead they will call for the Government to push for a free trade deal which Mr Davis had planned before he was forced to resign over the Chequers plan which was secretly drawn up by civil servants.

Speaking ahead of the event, Mr Davis said: “The Government’s Chequers proposal doesn’t meet the requirements of the referendum. We may be out of Europe but we would still be run by Europe.

“We must pursue a Canada-style deal which the EU has already made clear they are agreeable to.

“If this is not possible, Britain can still thrive with a World Trade Deal under World Trade Organisation rules.”

He added: “I am joining the Leave Means Leave rally in Bolton as a matter of principle – to ensure Brexit is delivered and democracy upheld.

“I look forward to sharing a platform with other politicians from across the political spectrum to support this cause.”

Ms Hoey, who is being threatened with deselection by Labour over her principled stance of supporting the British people’s vote on Brexit, said: “I am delighted to be speaking in a strong Leave area with the Leave Means Leave campaign about the importance of a proper Brexit.”

The rally is the first of a series as the Brexit fightback gets underway.

There will be a major rally in Birmingham on Sunday 30 September at the Conservative Party Conference followed by further rallies planned in Torquay, Bournemouth, Gateshead and Harrogate during October.

Campaigners will also be distributing pro-Brexit leaflets across the country explaining how a World Trade Deal with no formal EU deal will benefit Britain despite Remainer attempts to stir up a Project Fear campaign against it.

The plans were unveiled as Matthew Elliott, who founded Vote Leave, issued a call to arms to Brexit campaigners to fight back after a relentless Project Fear campaign by Remainers.

In an interview with the New Statesman has said: “We won a crucial battle but we could lose the overall war.”

He said: “I’m disappointed that the Leave side left the battlefield after the referendum.”

Mr Elliott and many of his colleagues disappeared from the political battle after the campaign leaving it to Leave Means Leave and the European Research Group of Tory MPs to keep up the fight against the Remainer onslaught.

But Mr Elliott suggested that the early days of Theresa May’s government had given a “false sense of security” for Brexiteers with the appointment of DMr Davis as Brexit Secretary and the red lines from the Prime Minister suggesting the UK would leave the EU properly.

But since then Mr Davis has resigned along with former foreign secretary Boris Johnson and the Prime Minister is pressing ahead with the controversial Chequers plan drawn up by civil servants led by Olly Robbins which many Brexiteers believe will turn Britain into “an EU colony”.

Mr Elliott said: “You can understand why groups like Change Britain scaled down their operations but I still think it was a mistake.”

And he warned that  “we’re moving towards a softer Brexit than we might otherwise have had”.

Mr Elliott suggested: “It’s really time for people on the Leave side, who want to make sure that the final deal is close to [Theresa May’s] Lancaster House speech, to speak up and make their opinions heard and to get back on the pitch.”

Mr Elliott’s Vote Leave group has been bogged down by an investigation by the Electoral Commission which fined it for allegedly breaking election law.

The group is due to fight the conclusions in the courts claiming that the investigation was unfair and biased.