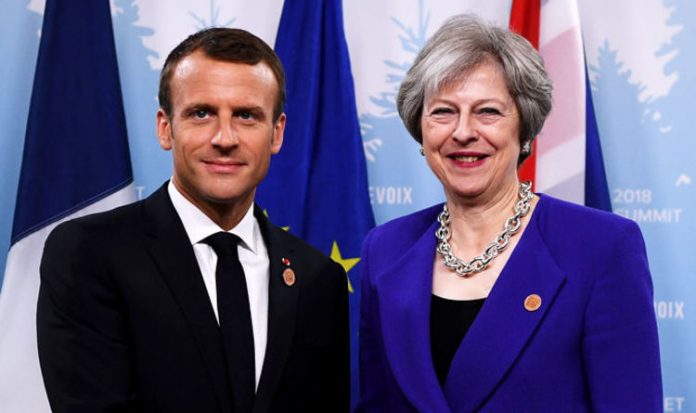 The French president, a staunch Europhile, showed no signs of softening his a hardline stance on Brexit as he gave a speech in Paris today.

Mr Macron said his “priority” in the negotiations is ensuring the EU’s unity, rather than striking a favourable trade deal with Britain.

His comments are likely to infuriate Theresa May who held one-on-one walks with Mr Macron in France earlier this month.

Speaking to French ambassadors at the Elysee Palace, Mr Macron said: “Brexit is a sovereign choice, which we must respect.

“But it can’t come at the expense of the European Union’s integrity.

“France wants to maintain a strong, special relationship with London, but not if the cost is the EU’s unravelling.

“We will have to build a strategic partnership with the United Kingdom but the priority is rebuilding the EU.

Mr Macron, who was elected last year, went on to signal his desire to push for greater EU co-operation over defence and security.

Taking a thinly veiled dig at US president Donald Trump, he said: “Europe cannot rely on the United States only for its security.

“It’s up to us to meet our responsibilities and guarantee our security, and therefore European sovereignty.

“I want us to launch an exhaustive review of our security with all Europe’s partners, which includes Russia.

“The isolationism that the United States is experiencing is not new. It had begun with some elements with the previous administration.

“We should see this as a symptom of the crisis of multilateralism.”

Mr Macron’s remarks came as Theresa May prepares to fly to Africa to strike post-Brexit trade deals with emerging economies.

Mrs May said her aim is to “deepen and strengthen” partnerships around the world as the UK prepares to leave the EU.

She will arrive back in the UK just days before Parliament’s summer recess ends, setting up a House of Commons showdown over Brexit.